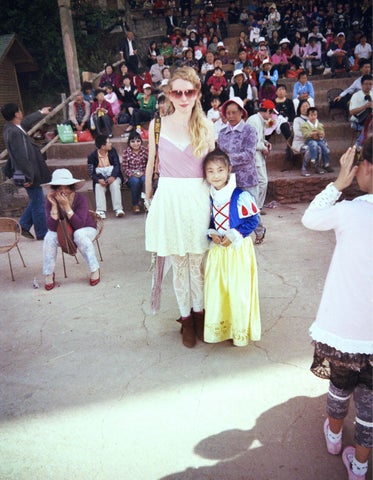 S. IN WONDERLAND “Nihao means ‘hi, how are you’. It’s not a question you’re supposed to answer.” The story took a sudden turn I hadn’t foreseen. I couldn’t take photos unnoticed, before I had even started I failed in doing what I had come to do. A door closed but at the same time a window opened. Being a blonde, blueeyed westerner, people turned me into a character in their own story. I became part of a voyeuristic show, in which the photographer and the photographed kept switching places. Not only the tourists but the dwarves, too, turned me into the subject of their photography, into a part of the show. Taking photos was part of their daily routine, so they were happy to take over. They reached out for the camera – without words they gestured that I should hand it over to them – even if their hands were too small to hold it. I was no longer a mere tourist-photographer. I was looking through their eyes and saw my own reflection. As my voyeuristic trick was forced upon myself, we watched each other as equals, at least for a photo-while. This situation created a whole new point of view. I became part of a live exhibition, I was exposed to the tourists and to the dwarves, and they were exposed to me. The focus shifted from ‘they are small’ to ‘I am tall’. My fascination was mirrored, their attraction became mine. I tried to understand them, as well as my own deeds. The solution lay in the symbiosis where both sides met: the photo. This was the road to empathy: the roles were reversed, I was subjected to their gaze, swallowed and consumed. A prisoner of the image.

Standing in an uncomfortable position, with a lost smile, I felt squeezed in a frame too tight. I couldn’t breathe, surrounded by pushy strangers demanding my presence. They grabbed my arm firmly and pulled me close. Some days there were hardly any visitors. During busy moments I often hid in the little houses with the dwarves, casting angry looks at intruders who dared to enter our private space without an invitation. The one and only day the park was swarming with tourists, I fled. I ignored the glances, turned down people who tugged at my sleeves, I walked away. I left the park and embraced my freedom. I had experienced what it means to be photo-property. As if I took off a Snow White costume, I decided that I had fulfilled my part, and went back to being a normal Belgian girl. But for the dwarves the show must go on. I tried to understand the ‘subjects’ of the ‘empire’. Armed with Western reasoning, I thought that I could tackle this ‘unethical concept’ -as I perceived it- but personal contact with the parkdwellers soon disarmed me. The rooms they shared were shabby and windowless, but the park became harder and harder to reject. Clear answers never came and in the end only confusion remained in my quest for truth. This story had two sides like a bickering pair of Siamese twins.