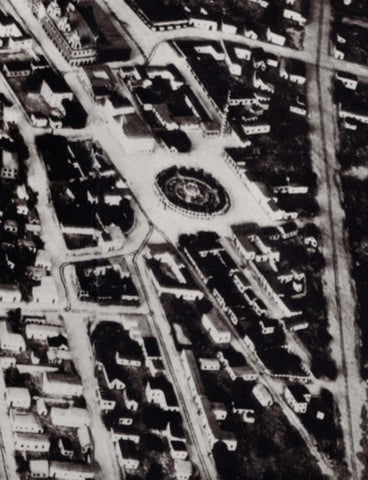 â&#x20AC;&#x153;In this corner of a great nation, here, on the edge of the continent, here, in the valley of the west, far from the great centers, isolated, remote, lost.â&#x20AC;?

John Feathers, the occupant of a ninety year old

cottage in Mount Washington, passed away on

deniable sadness, I pitied his lonely and mysterious

life. I imagined him, day in day out, at home read-

alone leaving behind no known survivors,

ing his maps, studying them over carefully plotting

shortly after his death his house was slanted for

for his next yourney. This Ied me to think, more and

demolition. While city officials were prepping the

more, about the idea of maps and how early on in our

948-square-foot teardown they stumbled upon an

history they are crucial, not only in helping us under-

incredible and unexpected treasure. Tens of thou-

stand and define the places we inhabit, but also as

proof that such places exists. Now unlike Mr. Feath-

small, square and round; maps from everywhere

ers I have never had the urge to collect maps, and to

were stuffed in file cabinets, crammed in card-

board boxes, and jammed in old diary crates. On

til recently. Early on in my childhood I have traveled

the time of his death he had amassed one of the

and lived in many different cities around the world,

Trying to map the life of John Feathers has been a

daunting task, and little is known about his past. It is believed that the hospital dietitian led a secluded and mysterious life, and that his obsession with maps started at a young age.

it isn’t the search for new maps and places, and the

738 is the result of this tension between longing and

resulting urge to leave and explore them what I am

belonging. And though these images were made in

after, but rather the opposite. For me maps are not

the proximity of my home, mapped in the real world,

escape routes for my body and mind to vacate to, but

Los Angeles takes the role of a “stand-in” for some-

instead cruel reminders that I am always going with-

where else, somewhere far into the topography of

out ever returning. It was only after relocating to Los

longing. A place as imaginary as it is real.

Angeles that I’ve come to understand that all this time one of the things lacking in my journeys has been that place to return to; that 90 year old cottage slanted for demolition where I can stash and keep all those maps and memories from all my travels. A place that I could not only long for, but also one that I could belong.