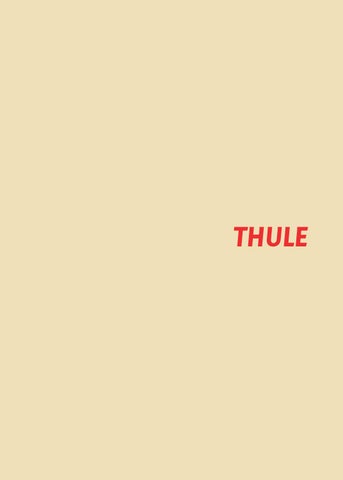 The farthest of all, which are known and spoke of, is Thule; in which there be no nights at all, as we have declared, about mid-summer, namely when the Sunne passeth through the signe Cancer; and contrariwise no daies in midwinter: and each of these times they suppose, doe last sixe moneths, all day, or all night. Timaeus the Historiographer saith, That farther within-forth, and six dayes sailing from Britaine, there lyeth the Iland Mictis, in which white lead groweth: and, that the Britaines doe sail thither in winter vessels covered with leather round about and well sowed. There be that make mention of others beside, to wit, Scandia, Dumna, and Bergos, and the biggest of all the rest Nerigos, from which men saile to Thule. Within one daies sailing from Thule, is the frozen sea, named of some Cronium.

With favoring winds, oâ&#x20AC;&#x2122;er sunlit seas, We sailed for the Hesperides, The land where golden apples grow; But that, ah! that was long ago. How far, since then, the ocean streams Have swept us from that land of dreams, That land of fiction and of truth, The lost Atlantis of our youth! Whither, oh, whither? Are not these The tempest-haunted Hebrides, Where sea gulls scream, and breakers roar, And wreck and sea-weed line the shore? Ultima Thule! Utmost Isle! Here in thy harbors for a while We lower our sails; a while we rest From the unending, endless quest.

There was a king in Thule, Was faithful to the grave, Whom she that loved him truly In dying a goblet gave. He found no prize more appealing, Each feast he drained the cup; To his eyes the tears came stealing Whenever he held it up. And when he came to dying, The towns in his realm he enrolled, His heir no prize denying, Except that cup of gold. And at a royal wassail With all his knights sat he In the hall of his fatherâ&#x20AC;&#x2122;s castle That faces toward the sea. The old carouser slowly Stood up, drank lifeâ&#x20AC;&#x2122;s last glow, And flung the cup so holy Into the flood below. He saw it plunging, drinking As deep in the sea it sank. His eyes the while were sinking, Not a drop again he drank.