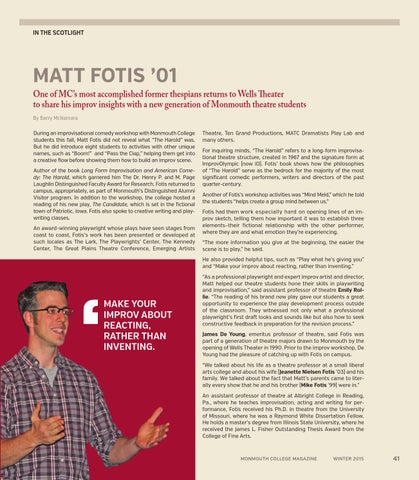 One of MC’s most accomplished former thespians returns to Wells Theater to share his improv insights with a new generation of Monmouth theatre students By Barry McNamara During an improvisational comedy workshop with Monmouth College students this fall, Matt Fotis did not reveal what “The Harold” was. But he did introduce eight students to activities with other unique names, such as “Boom!” and “Pass the Clap,” helping them get into a creative flow before showing them how to build an improv scene. Author of the book Long Form Improvisation and American Comedy: The Harold, which garnered him The Dr. Henry P. and M. Page Laughlin Distinguished Faculty Award for Research, Fotis returned to campus, appropriately, as part of Monmouth’s Distinguished Alumni Visitor program. In addition to the workshop, the college hosted a reading of his new play, The Candidate, which is set in the fictional town of Patriotic, Iowa. Fotis also spoke to creative writing and playwriting classes. An award-winning playwright whose plays have seen stages from coast to coast, Fotis’s work has been presented or developed at such locales as The Lark, The Playwrights’ Center, The Kennedy Center, The Great Plains Theatre Conference, Emerging Artists

Theatre, Ten Grand Productions, MATC Dramatists Play Lab and many others. For inquiring minds, “The Harold” refers to a long-form improvisational theatre structure, created in 1967 and the signature form at ImprovOlympic (now iO). Fotis’ book shows how the philosophies of “The Harold” serve as the bedrock for the majority of the most significant comedic performers, writers and directors of the past quarter-century. Another of Fotis’s workshop activities was “Mind Meld,” which he told the students “helps create a group mind between us.” Fotis had them work especially hard on opening lines of an improv sketch, telling them how important it was to establish three elements–their fictional relationship with the other performer, where they are and what emotion they’re experiencing. “The more information you give at the beginning, the easier the scene is to play,” he said. He also provided helpful tips, such as “Play what he’s giving you” and “Make your improv about reacting, rather than inventing.”

MAKE YOUR IMPROV ABOUT REACTING, RATHER THAN INVENTING.

“As a professional playwright and expert improv artist and director, Matt helped our theatre students hone their skills in playwriting and improvisation,” said assistant professor of theatre Emily Rollie. “The reading of his brand new play gave our students a great opportunity to experience the play development process outside of the classroom. They witnessed not only what a professional playwright’s first draft looks and sounds like but also how to seek constructive feedback in preparation for the revision process.” James De Young, emeritus professor of theatre, said Fotis was part of a generation of theatre majors drawn to Monmouth by the opening of Wells Theater in 1990. Prior to the improv workshop, De Young had the pleasure of catching up with Fotis on campus. “We talked about his life as a theatre professor at a small liberal arts college and about his wife (Jeanette Nielsen Fotis ’03) and his family. We talked about the fact that Matt’s parents came to literally every show that he and his brother (Mike Fotis ’99) were in.” An assistant professor of theatre at Albright College in Reading, Pa., where he teaches improvisation, acting and writing for performance, Fotis received his Ph.D. in theatre from the University of Missouri, where he was a Raymond White Dissertation Fellow. He holds a master’s degree from Illinois State University, where he received the James L. Fisher Outstanding Thesis Award from the College of Fine Arts. 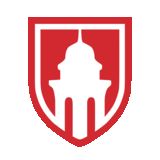