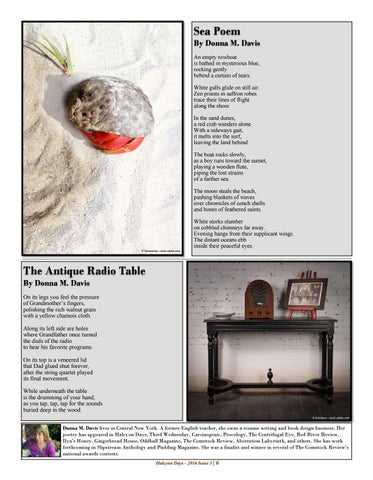 Sea Poem By Donna M. Davis An empty rowboat is bathed in mysterious blue, rocking gently behind a curtain of tears. White gulls glide on still air. Zen priests in saffron robes trace their lines of flight along the shore. In the sand dunes, a red crab wanders alone. With a sideways gait, it melts into the surf, leaving the land behind. The boat rocks slowly, as a boy runs toward the sunset, playing a wooden flute, piping the lost strains of a farther sea. The moon steals the beach, pushing blankets of waves over chronicles of conch shells and bones of feathered saints. White storks slumber on cobbled chimneys far away. Evening hangs from their supplicant wings. The distant oceans ebb inside their peaceful eyes. © lunamarina - stock.adobe.com

The Antique Radio Table By Donna M. Davis On its legs you feel the pressure of Grandmother’s fingers, polishing the rich walnut grain with a yellow chamois cloth. Along its left side are holes where Grandfather once turned the dials of the radio to hear his favorite programs. On its top is a veneered lid that Dad glued shut forever, after the string quartet played its final movement. While underneath the table is the drumming of your hand, as you tap, tap, tap for the sounds buried deep in the wood. © keladawy - stock.adobe.com 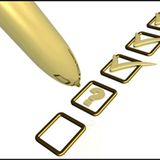