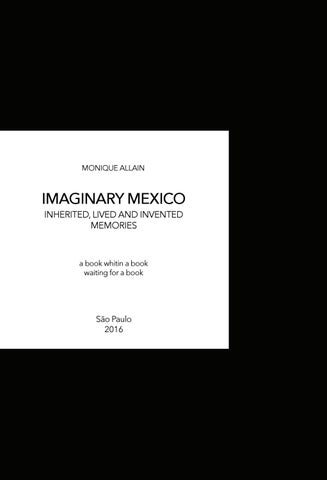 a book whitin a book waiting for a book

All images composing the pages of this publication were recreated from artworks Iâ&#x20AC;&#x2122;ve been producing since 1997. My Mexican roots, ever-present, have spoken loudly. Taking notice of that fact, between 2000 and 2007 I adopted the artistic identity of Maria Palomino (appropriating myself of my own name, Monique Marie Allain e Palomino), with which I signed several artworks. Paintings, sculptures, drawings and photographs expand the verbal alphabet in search of a kinesthetic dimension between images and words to express, with freedom and enthusiasm, impressions, feelings and affections.

The gathering, transformation and integration of works that, although created over the years, are still clear and significant today, nurtured this essay. The present, living experience of â&#x20AC;&#x153;the here and the now" relies on the accumulation of the past, and updates it to situate and reinvent itself at every moment.

But what is a book?

“You have to begin to lose your memory, if only in bits and pieces, to realize that memory is what makes our lives. Life without memory is no life at all... Our memory is our coherence, our reason, our feeling, even our action. Without it we are nothing…” Luis Buñuel 7

Imaginary Mexico. Inherited memories of a land other.

How is it to be daughter of a Mexican mother?

“(…) what kind of life, what kind of world, of one’s self, can be preserved in a man who has lost much of his memory, and with that memory his circumstances and references within time?” Oliver Sacks 10

"In search of space, we recover the anxious search of threatened identities, (...). To be an immigrant's daughter is to be an eternal immigran In memories, It is to carry within ourselves a space dreamed locateshom land, often feared, loved and desired, but time. impossi le to be truly found. A land inhabited only in imaginatio When space is lost, It is living in perpetual nostalgia, in identity a vain wavers attempt achieve a simultaneous state of BEINGasand BECOMIN time/space make up the framework within which the subject re-knows itself." To feel like you belong to this country without ever having truly inhabited it?

Itâ&#x20AC;&#x2122;s to experience an infinite longing for a place that we barely know, but still engrosses us, claims us, haunts us. Itâ&#x20AC;&#x2122;s nostalgia for a fiction that arises from intense ancestral memories, stories, fantasies, excessive affections... and a few memories of lived moments. In memories, the distinction between accounts and facts are lost. Distinguishable temporalities are jostled and updated, merged together in the same frame, in a single instant, ephemeral and elusive in the present time. Itâ&#x20AC;&#x2122;s in this instant that concreteness and abstraction reveal the meaning of our existence and witness that life is nothing more than fiction.

To be an immigrant's daughter is to be an eternal immigrant. It is to carry within ourselves a dreamed homeland, often feared, loved and desired, but impossible to be truly found. A land inhabited only in imagination. It is living in perpetual nostalgia, in a vain attempt to achieve a simultaneous state of BEING and BECOMING.

Imaginary Mexico... How could this place be?

Of keen aesthetic sense, of elegance and sobriety in its forms, lively colors, noble and proud bearing.

Land versed in its history, its tragedies, its origins.

Explosive like a volcano that spits out its incandescent lava and let it overflow, overlay, and perpetuate, thus, its sorrows. A territory in which the mute gritting of teeth ravages the coexistence of colonizer and colonized, between non-visible walls of bitterness and thirst for revenge.

Majestic, imaginary Mexico... Country whose culture is the daughter of the marriage between Montezuma and the Virgin of Guadalupe. Country of faith and betrayal.

A place where porcelain and ceramics face, confront, repel, attract each otherâ&#x20AC;Ś and from the same batch become a hybrid single piece,

doubtless vulnerable, bearing so many cracks and scars! But a whole piece, rich, unique, superb in its dignity!

Much different natures, and habits and values â&#x20AC;&#x2039;â&#x20AC;&#x2039;totally unknown to each other, were faced in confrontation. The prodution of a piece created by the merge of porcelain and ceramic arose from the desire to experience and reify this process.

The pieceâ&#x20AC;&#x2122;s frailty is a natural consequence of an experimental and risky initiative. The proposal was to present as work the outcome of the burning, whatever the object might had become. And then came the surprise. 21

Of water and oil, light and shadow, faith, warmth and roughness

mysterious, monstrous... of domination and voluptuouness, where manâ&#x20AC;&#x2122;s nature, between virile and fragile, quivers before its own emotions.

Place where a man cries like a child the loss of his mother, walks without rest and comfort in pursuit of her intangible presence, and keeps obeying her, even after her death.

Imaginary Cheerful, Mexico... vibrant, festive, Populated arid, hot, sour and spicy. Land by children of sun, who run, earth and sea, scream and play; of frogs, by lovers who sing snakes, lizards, and dance tequilas their sorrows, and scorpions; desilusions and passions, of sung Masses who whisper by the Mariachis, their desires. of chilis, churros y Mexico, nopales; of sangrita, land of shapes, guacamole, ceviche colors, fragrances and jugo de Jamaica. and flavors.

A frontier place where living and dead coexist, meet, play and celebrate together?

How can this place be, where existence operates at maximum power, where the limits between possible and impossible are dissolved? A place where one cannot discern where reality ends and fiction begins?

Where to find it, if not in imagination?

Where is this place?

Loving place, mother place, MOTHER... WHERE ARE YOU?

IMAGINARY MEXICO: INHERITED, LIVED AND INVENTED MEMORIES is a poetic approach on Mexican culture and imaginary. This work is made upon resonances that I, as a Brazilian, daughter of a Mexican woman, recognized along the reading of "Peter Palamo", by Juan Rulfo. They are visual memories of ancestral memories, inherited stories, and recollections of lived and invented moments. I seek roots from lost ancestors in a distant land, numerous references and multiple affections that give shape to identity and strengthen ties with this land. Maybe this way, a little star, among the countless constellations that inhabit the sky of this country and in it inscribe its vibrant personality, become more visible. Mexico is, for me, synonym of childhood,of mother. It is desire for a reunion.

This is a book within a book, waiting for a book. It was born from the experience lived by the author, during the year 2015, as a member of the research group Origins of Ibero-American Fablery, directed by Nelida PiĂąon. One of the intentions of this proposal was to subvert the order of things by infiltrating this small book in an academic publication, a place where an artwork is not usually expected to be found. It embodies the will to draw the aesthetic experience close to the reflections generated by it. Unfortunately, the proposal was rejected for not meeting the specifications required for the selection of articles of the research group, a fact that reveals the hermetic culture of our institutional systems and the difficulties imposed by them to our attempts in establishing a dialogue between diverse types and approaches to knowledge, especially when it concerns poetic freedom. A work of art only comes to real existence when presented to the public. IMAGINARY MEXICO: INHERITED, LIVED AND INVENTED MEMORIES is an incomplete work in search of a host that shall allow it to be presented in full, so as to comply with its fate. Itâ&#x20AC;&#x2122;s an ARTIST BOOK in process. This is a book within a book, waiting for a book. It was born from the experience lived by the author, during the year 2015, as a member of...

This is a book within a book, waiting for a book. It was born from the experience lived by the author, during the year 2015, as a member of...