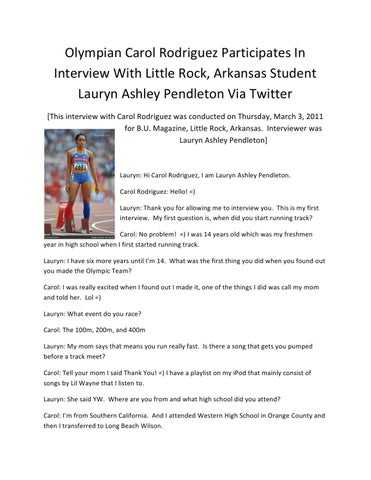 Lauryn: Hi Carol Rodriguez, I am Lauryn Ashley Pendleton. Carol Rodriguez: Hello! =) Lauryn: Thank you for allowing me to interview you. This is my first interview. My first question is, when did you start running track? Carol: No problem! =) I was 14 years old which was my freshmen year in high school when I first started running track. Lauryn: I have six more years until Iâ&amp;#x20AC;&amp;#x2122;m 14. What was the first thing you did when you found out you made the Olympic Team? Carol: I was really excited when I found out I made it, one of the things I did was call my mom and told her. Lol =) Lauryn: What event do you race? Carol: The 100m, 200m, and 400m Lauryn: My mom says that means you run really fast. Is there a song that gets you pumped before a track meet? Carol: Tell your mom I said Thank You! =) I have a playlist on my iPod that mainly consist of songs by Lil Wayne that I listen to. Lauryn: She said YW. Where are you from and what high school did you attend? Carol: Iâ&amp;#x20AC;&amp;#x2122;m from Southern California. And I attended Western High School in Orange County and then I transferred to Long Beach Wilson.

Lauryn: If you didnâ&amp;#x20AC;&amp;#x2122;t run track, would you play another sport? If so, which 1? Carol: Yea, I would play Tennis =) Lauryn: I play tennis too. I want to play you. LOL. How many hours do you think you practice track in one week? Carol: Nice! We have to play a game one day! =) I train 5 days a week. Around 4 hours a day. So I would say about 20 hours a week. Lauryn: WOW! That is a long time. 1 last question. What advice would you give a young female athlete? Carol: =) My advice would be to stay focused on their goals 2 never give up even when it gets tuff and most importantly to have fun! Lauryn: Thank you so much for the interview! My mom will email you a copy Bye Bye Carol: Youâ&amp;#x20AC;&amp;#x2122;re welcome!! Thanks for interviewing me! =) [End of Interview]

Lauryn interviews Carol about sports and her interest