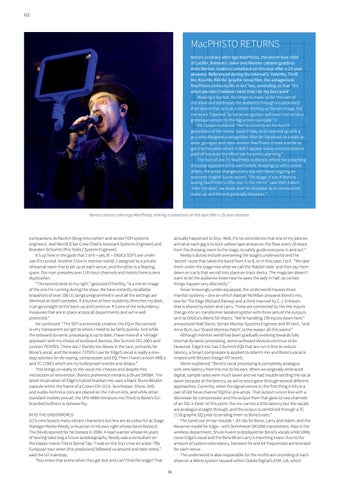 MacPHISTO RETURNS Bono’s contrary alter-ego MacPhisto, the secret love child of Lucifer, Batman’s Joker and Weimer cabaret goddess Anita Berber, makes a comeback on this tour after a 25-year absence. Referenced during the interval’s ‘Hold Me, Thrill Me, Kiss Me, Kill Me’ graphic novel film, the antagonistic MacPhisto comes to life in Act Two, reminding us that “it’s when you don’t believe I exist that I do my best work”. Wearing a top hat, the singer is made up for this part of the show and addresses the audience through a customised iPad device that acts as a mirror. Picking up Bono’s image, the camera is ‘hijacked’ by facial recognition software that sends a grotesque version to the big screen via Apple TV. Ric Lipson explained: “We’re currently on the fourth generation of the mirror. Gavin Friday and I teamed up with a guy who designed a recognition filter for Facebook to create an older, grungier and more sinister MacPhisto. It took a while to get it to the point where it didn’t appear hokey and persistence paid off because the effect can be pretty alarming.” The face of Zoo TV, MacPhisto is Bono’s vehicle for preaching the polar opposite of his own beliefs. Keeping up with current affairs, the script changes every day with Bono feigning an eccentric English luvvie accent. “On-stage, it’s as if Bono is seeing MacPhisto’s reflection in the mirror,” said Matt Askem. “After ‘Acrobat’, we shoot over his shoulder as he removes his make-up and the evil gradually dissolves.”

Bono’s contrary alter-ego MacPhisto, making a comeback on this tour after a 25-year absence.

companions Jo Ravitch (long-time cohort and senior FOH systems engineer), Joel Merrill (Clair Crew Chief & Assistant Systems Engineer) and Brandon Schuette (Pro Tools / System Engineer). It’s up here in the gods that 2 of 8 – yes, 8! – DiGiCo SD7’s are under Joe O’s control. Another 3 live in monitor world; 2 assigned to a private rehearsal room that is set up at each venue, and the other is a floating spare. Our man presides over 118 input channels and insists there is zero duplication. “The second desk to my right,” gestured O’Herlihy, “is a mirror image of the one I’m running during the show. We have instantly recallable snapshots of over 100 U2 songs programmed in and all the settings are identical on both consoles. If a bucket of beer suddenly drenches my desk, I can go straight to the back-up and continue. It’s one of the redundancy measures that are in place across all departments and we’re well protected.” He continued: “The SD7 is extremely creative; the EQ in the console is very transparent so I get to where I need to be fairly quickly. And while the onboard dynamic processing is up to date, I have more of a ‘vintage’ approach with my choice of outboard devices, like Summit DCL200’s and Lexicon PCM70’s. There are 2 Manley Vox Boxes in the rack, primarily for Bono’s vocal, and the Avalon 737SPs I use for Edge’s vocal is really a onestop solution for de-essing, compression and EQ. Then I have Lexicon 480Ls and TC 2290’s which are my bulletproof reverbs and delays.” This brings us neatly to the vocal mic choices and despite this microcosm of reinvention, Bono’s preference remains a Shure SM58A. The latest incarnation of Edge’s hybrid headset mic uses a black Shure Beta54 capsule within the frame of a Crown CM-311A. Sennheiser, Shure, AKG and Audio-Technica mics are placed on the 3 drum kits, and while other standard models prevail, the DPA 4088 miniature mic fitted to Bono’s EUbranded bullhorn is noteworthy.

actually happened to Styx. Well, it’s no coincidence that one of my jobs on arrival at each gig is to stick yellow tape arrows on the floor every 20 steps from the dressing room to the stage, to safely guide everyone in and out.” Reedy’s duties include overseeing the stage’s underworld and the ‘secret’ route that takes the band from A to B, or in this case, I to E. “We take them under the stage into what we call the ‘Rabbit Hole’ and then lay them down on carts that we roll into place on track decks. The magician doesn’t want to let the audience know how he saws the lady in half, so certain things happen very discreetly.” Never knowingly under-equipped, the underworld houses three monitor systems – one on which Alastair McMillan prepares Bono’s mix, one for The Edge (Richard Rainey) and a third manned by C.J. Eriksson that is shared by Adam and Larry. These are connected by the mic inputs that go into an transformer isolated splitter with three sets of the outputs sent to DiGiCo’s 96kHz SD-Racks. “We’re handling 170 inputs down here,” announced Niall Slevin, Senior Monitor Systems Engineer and RF tech, “and Anne Butt, our ‘Grand Mistress Patch’, is the reason all this works!” Although monitor world has been gradually evolving towards fully internal dynamic processing, some outboard devices continue to be favoured. Edge’s mix has 3 Summit EQs that are run in line to reduce latency; a Smart compressor is applied to Adam’s mix and Bono’s vocal is treated with Bricasti Design M7 reverb. Slevin explained: “Bono’s vocal processing is completely analogue with zero latency from the mic to his ears. When we originally embraced digital, sample rates were much lower and we had trouble settling the vocal down because of the latency, so we’ve since gone through several different approaches. Currently, when the signal comes in, the first thing it hits is a pair of old Neve channel EQ/mic pre-amps. That output runs in line with a distressor for compression and the output from that goes to two channels of an SSL X-Desk. At this point, the mix carries a little latency but the vocals are analogue straight through, and the output is combined through a TC 1128 graphic EQ prior to sending them to Bono’s ears.” The band use JH ear moulds – JH-16s for Bono, Larry and Adam, and the Roxanne model for Edge – with Sennheiser SR2050 transmitters. Also in the wireless department, Shure Axient is deployed for Bono’s vocals while UR4s cover Edge’s vocal and the Beta 98 on Larry’s marching snare. Due to the amount of system redundancy, between 54 and 64 frequencies are licensed for each venue. The underworld is also responsible for the multitrack recording of each show on a 96kHz system housed within Diablo Digital’s EXIII 128, which

INTO THE UNDERWORLD U2’s crew boasts many vibrant characters but few are as colourful as Stage Manager Rocko Reedy, a musician in his own right whose band Rocko & The Devils opened for his bosses in 2006. A road warrior whose 44 years of touring tales beg a future autobiography, Reedy was a consultant on the classic movie This Is Spinal Tap. “I was on the Styx crew on a late-’70s European tour when [the producers] followed us around and took notes,” said the U2 mainstay. “You know that scene when they get lost and can’t find the stage? That 36