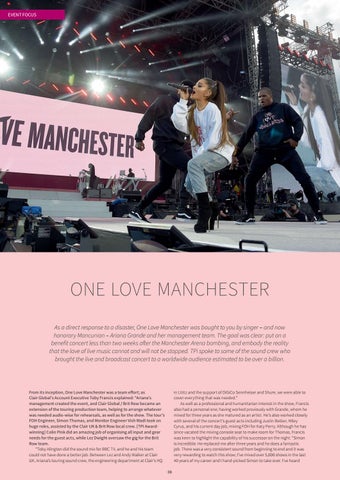 ONE LOVE MANCHESTER As a direct response to a disaster, One Love Manchester was bought to you by singer – and now honorary Mancunian – Ariana Grande and her management team. The goal was clear: put on a benefit concert less than two weeks after the Manchester Arena bombing, and embody the reality that the love of live music cannot and will not be stopped. TPi spoke to some of the sound crew who brought the live and broadcast concert to a worldwide audience estimated to be over a billion.

From its inception, One Love Manchester was a team effort; as Clair Global’s Account Executive Toby Francis explained: “Ariana’s management created the event, and Clair Global / Brit Row became an extension of the touring production team, helping to arrange whatever was needed audio-wise for rehearsals, as well as for the show. The tour’s FOH Engineer, Simon Thomas, and Monitor Engineer Vish Wadi took on huge roles, assisted by the Clair UK & Brit Row local crew. [TPi Awardwinning] Colin Pink did an amazing job of organising all input and gear needs for the guest acts, while Lez Dwight oversaw the gig for the Brit Row team. “Toby Alington did the sound mix for BBC TV, and he and his team could not have done a better job. Between Lez and Andy Walker at Clair UK, Ariana’s touring sound crew, the engineering department at Clair’s HQ

in Lititz and the support of DiGiCo Sennheiser and Shure, we were able to cover everything that was needed.” As well as a professional and humanitarian interest in the show, Francis also had a personal one; having worked previously with Grande, whom he mixed for three years as she matured as an artist. He’s also worked closely with several of the concert’s guest acts including Justin Beiber, Miley Cyrus, and his current day job, mixing FOH for Katy Perry. Although he has since vacated the mixing console seat to make room for Thomas, Francis was keen to highlight the capability of his successor on the night: “Simon is incredible. He replaced me after three years and he does a fantastic job. There was a very consistent sound from beginning to end and it was very rewarding to watch this show; I’ve mixed over 5,000 shows in the last 40 years of my career and I hand-picked Simon to take over. I’ve heard 08