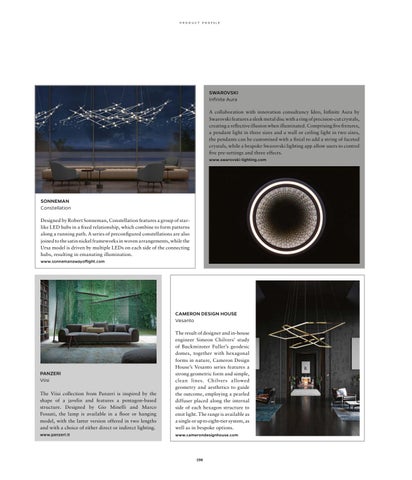 SWAROVSKI Infinite Aura A collaboration with innovation consultancy Ideo, Infinite Aura by Swarovski features a sleek metal disc with a ring of precision-cut crystals, creating a reflective illusion when illuminated. Comprising five fixtures, a pendant light in three sizes and a wall or ceiling light in two sizes, the pendants can be customised with a finial to add a string of faceted crystals, while a bespoke Swarovski lighting app allow users to control five pre-settings and three effects. www.swarovski-lighting.com

SONNEMAN Constellation Designed by Robert Sonneman, Constellation features a group of starlike LED hubs in a fixed relationship, which combine to form patterns along a running path. A series of preconfigured constellations are also joined to the satin nickel frameworks in woven arrangements, while the Ursa model is driven by multiple LEDs on each side of the connecting hubs, resulting in emanating illumination. www.sonnemanawayoflight.com

The Viisi collection from Panzeri is inspired by the shape of a javelin and features a pentagon-based structure. Designed by Gio Minelli and Marco Fossati, the lamp is available in a floor or hanging model, with the latter version offered in two lengths and with a choice of either direct or indirect lighting.

The result of designer and in-house engineer Simeon Chilvers’ study of Buckminster Fuller’s geodesic domes, together with hexagonal forms in nature, Cameron Design House’s Vesanto series features a strong geometric form and simple, clean lines. Chilvers allowed geometry and aesthetics to guide the outcome, employing a pearled diffuser placed along the internal side of each hexagon structure to emit light. The range is available as a single or up to eight-tier system, as well as in bespoke options.