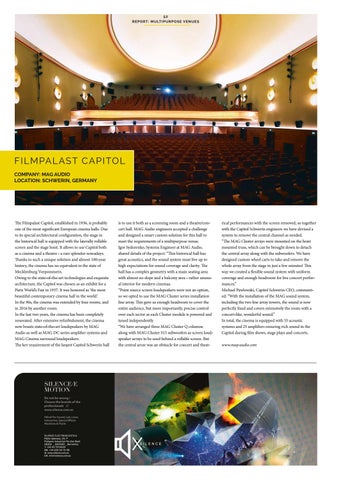 The Filmpalast Capitol, established in 1936, is probably one of the most significant European cinema halls. Due to its special architectural configuration, the stage in the historical hall is equipped with the laterally rollable screen and the stage hoist. It allows to use Capitol both as a cinema and a theatre - a rare splendor nowadays. Thanks to such a unique solution and almost 100-year history, the cinema has no equivalent in the state of Mecklenburg Vorpommern. Owing to the state-of-the-art technologies and exquisite architecture, the Capitol was chosen as an exhibit for a Paris World’s Fair in 1937. It was honored as ‘the most beautiful contemporary cinema hall in the world.’ In the 90s, the cinema was extended by four rooms, and in 2016 by another room. In the last two years, the cinema has been completely renovated. After extensive refurbishment, the cinema now boasts state-of-the-art loudspeakers by MAG Audio as well as MAG DC series amplifier systems and MAG Cinema surround loudspeakers. The key requirement of the largest Capitol Schwerin hall

is to use it both as a screening room and a theatre/concert hall. MAG Audio engineers accepted a challenge and designed a smart custom solution for this hall to meet the requirements of a multipurpose venue. Igor Sydorenko, Systems Engineer at MAG Audio, shared details of the project: “This historical hall has great acoustics, and the sound system must live up to high expectations for sound coverage and clarity. The hall has a complex geometry with a main seating area with almost no slope and a balcony area - rather unusual interior for modern cinemas. “Point source screen loudspeakers were not an option, so we opted to use the MAG Cluster series installation line array. This gave us enough headroom to cover the entire audience, but more importantly, precise control over each sector as each Cluster module is powered and tuned independently “We have arranged three MAG Cluster Q columns along with MAG Cluster S15 subwoofers as screen loudspeaker arrays to be used behind a rollable screen. But the central array was an obstacle for concert and theat-

rical performances with the screen removed, so together with the Capitol Schwerin engineers we have devised a system to remove the central channel as needed. “The MAG Cluster arrays were mounted on the hoist mounted truss, which can be brought down to detach the central array along with the subwoofers. We have designed custom wheel carts to take and remove the whole array from the stage in just a few minutes! This way we created a flexible sound system with uniform coverage and enough headroom for live concert performances.” Michael Pawlowski, Capitol Schwerin CEO, commented: “With the installation of the MAG sound system, including the two line array towers, the sound is now perfectly fixed and covers extensively the room with a concert-like, wonderful sound.” In total, the cinema is equipped with 55 acoustic systems and 25 amplifiers ensuring rich sound in the Capitol during film shows, stage plays and concerts. www.mag-audio.com