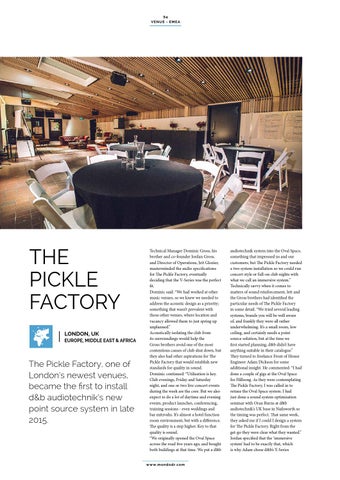 Technical Manager Dominic Gross, his brother and co-founder Jordan Gross, and Director of Operations, Jett Glozier, masterminded the audio specifications for The Pickle Factory, eventually deciding that the V-Series was the perfect fit. Dominic said: “We had worked at other music venues, so we knew we needed to address the acoustic design as a priority; something that wasn’t prevalent with those other venues, where location and vacancy allowed them to just spring up unplanned.” Acoustically isolating the club from its surroundings would help the Gross brothers avoid one of the most contentious causes of club shut down, but they also had other aspirations for The Pickle Factory that would establish new standards for quality in sound. Dominic continued: “Utilisation is key. Club evenings, Friday and Saturday night, and one or two live concert events during the week are the core. But we also expect to do a lot of daytime and evening events, product launches, conferencing, training sessions - even weddings and bar mitzvahs. It’s almost a hotel function room environment, but with a difference. The quality is a step higher. Key to that quality is sound. “We originally opened the Oval Space across the road five years ago, and bought both buildings at that time. We put a d&b www.mondodr.com

audiotechnik system into the Oval Space, something that impressed us and our customers; but The Pickle Factory needed a two system installation so we could run concert style or full-on club nights with what we call an immersive system.” Technically savvy when it comes to matters of sound reinforcement, Jett and the Gross brothers had identified the particular needs of The Pickle Factory in some detail. “We tried several leading systems, brands you will be well aware of, and frankly they were all rather underwhelming. It’s a small room, low ceiling, and certainly needs a point source solution, but at the time we first started planning, d&b didn’t have anything suitable in their catalogue.” They turned to freelance Front of House Engineer Adam Dickson for some additional insight. He commented: “I had done a couple of gigs at the Oval Space for Hillsong. As they were contemplating The Pickle Factory, I was called in to retune the Oval Space system. I had just done a sound system optimisation seminar with Oran Burns at d&b audiotechnik’s UK base in Nailsworth so the timing was perfect. That same week, they asked me if I could I design a system for The Pickle Factory. Right from the get-go they were clear what they wanted.” Jordan specified that the ‘immersive system’ had to be exactly that, which is why Adam chose d&b’s Y-Series

The January/February 2016 issue of mondo*dr is now available to read online here.

The January/February 2016 issue of mondo*dr is now available to read online here.