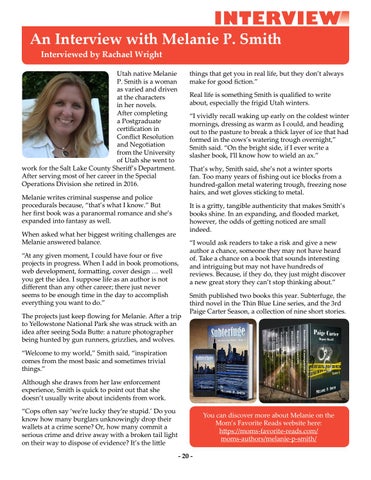 An Interview with Melanie P. Smith Interviewed by Rachael Wright

Utah native Melanie P. Smith is a woman as varied and driven at the characters in her novels. After completing a Postgraduate certification in Conflict Resolution and Negotiation from the University of Utah she went to work for the Salt Lake County Sheriff’s Department. After serving most of her career in the Special Operations Division she retired in 2016.

things that get you in real life, but they don’t always make for good fiction.” Real life is something Smith is qualified to write about, especially the frigid Utah winters. “I vividly recall waking up early on the coldest winter mornings, dressing as warm as I could, and heading out to the pasture to break a thick layer of ice that had formed in the cows’s watering trough overnight,” Smith said. “On the bright side, if I ever write a slasher book, I’ll know how to wield an ax.” That’s why, Smith said, she’s not a winter sports fan. Too many years of fishing out ice blocks from a hundred-gallon metal watering trough, freezing nose hairs, and wet gloves sticking to metal.

Melanie writes criminal suspense and police procedurals because, “that’s what I know.” But her first book was a paranormal romance and she’s expanded into fantasy as well.

It is a gritty, tangible authenticity that makes Smith’s books shine. In an expanding, and flooded market, however, the odds of getting noticed are small indeed.

When asked what her biggest writing challenges are Melanie answered balance. “At any given moment, I could have four or five projects in progress. When I add in book promotions, web development, formatting, cover design … well you get the idea. I suppose life as an author is not different than any other career; there just never seems to be enough time in the day to accomplish everything you want to do.” The projects just keep flowing for Melanie. After a trip to Yellowstone National Park she was struck with an idea after seeing Soda Butte: a nature photographer being hunted by gun runners, grizzlies, and wolves.

“I would ask readers to take a risk and give a new author a chance, someone they may not have heard of. Take a chance on a book that sounds interesting and intriguing but may not have hundreds of reviews. Because, if they do, they just might discover a new great story they can’t stop thinking about.” Smith published two books this year. Subterfuge, the third novel in the Thin Blue Line series, and the 3rd Paige Carter Season, a collection of nine short stories.

“Welcome to my world,” Smith said, “inspiration comes from the most basic and sometimes trivial things.” Although she draws from her law enforcement experience, Smith is quick to point out that she doesn’t usually write about incidents from work. “Cops often say ‘we’re lucky they’re stupid.’ Do you know how many burglars unknowingly drop their wallets at a crime scene? Or, how many commit a serious crime and drive away with a broken tail light on their way to dispose of evidence? It’s the little

You can discover more about Melanie on the Mom’s Favorite Reads website here: https://moms-favorite-reads.com/ moms-authors/melanie-p-smith/ - 20 -