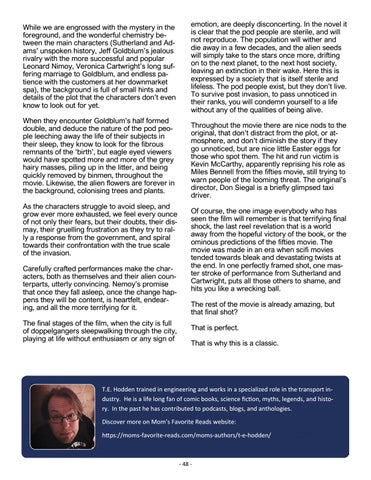 While we are engrossed with the mystery in the foreground, and the wonderful chemistry between the main characters (Sutherland and Adams’ unspoken history, Jeff Goldblum’s jealous rivalry with the more successful and popular Leonard Nimoy, Veronica Cartwright’s long suffering marriage to Goldblum, and endless patience with the customers at her downmarket spa), the background is full of small hints and details of the plot that the characters don’t even know to look out for yet. When they encounter Goldblum’s half formed double, and deduce the nature of the pod people leeching away the life of their subjects in their sleep, they know to look for the fibrous remnants of the ‘birth’, but eagle eyed viewers would have spotted more and more of the grey hairy masses, piling up in the litter, and being quickly removed by binmen, throughout the movie. Likewise, the alien flowers are forever in the background, colonising trees and plants. As the characters struggle to avoid sleep, and grow ever more exhausted, we feel every ounce of not only their fears, but their doubts, their dismay, their gruelling frustration as they try to rally a response from the government, and spiral towards their confrontation with the true scale of the invasion. Carefully crafted performances make the characters, both as themselves and their alien counterparts, utterly convincing. Nemoy’s promise that once they fall asleep, once the change happens they will be content, is heartfelt, endearing, and all the more terrifying for it. The final stages of the film, when the city is full of doppelgangers sleepwalking through the city, playing at life without enthusiasm or any sign of

emotion, are deeply disconcerting. In the novel it is clear that the pod people are sterile, and will not reproduce. The population will wither and die away in a few decades, and the alien seeds will simply take to the stars once more, drifting on to the next planet, to the next host society, leaving an extinction in their wake. Here this is expressed by a society that is itself sterile and lifeless. The pod people exist, but they don’t live. To survive post invasion, to pass unnoticed in their ranks, you will condemn yourself to a life without any of the qualities of being alive. Throughout the movie there are nice nods to the original, that don’t distract from the plot, or atmosphere, and don’t diminish the story if they go unnoticed, but are nice little Easter eggs for those who spot them. The hit and run victim is Kevin McCarthy, apparently reprising his role as Miles Bennell from the fifties movie, still trying to warn people of the looming threat. The original’s director, Don Siegal is a briefly glimpsed taxi driver. Of course, the one image everybody who has seen the film will remember is that terrifying final shock, the last reel revelation that is a world away from the hopeful victory of the book, or the ominous predictions of the fifties movie. The movie was made in an era when scifi movies tended towards bleak and devastating twists at the end. In one perfectly framed shot, one master stroke of performance from Sutherland and Cartwright, puts all those others to shame, and hits you like a wrecking ball. The rest of the movie is already amazing, but that final shot? That is perfect. That is why this is a classic.

T.E. Hodden trained in engineering and works in a specialized role in the transport industry. He is a life long fan of comic books, science fiction, myths, legends, and history. In the past he has contributed to podcasts, blogs, and anthologies. Discover more on Mom’s Favorite Reads website: https://moms-favorite-reads.com/moms-authors/t-e-hodden/