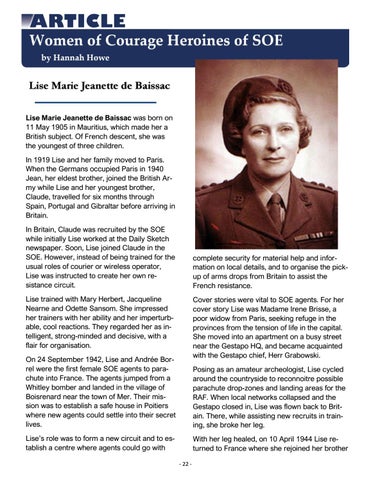 Women of Courage Heroines of SOE by Hannah Howe

Lise Marie Jeanette de Baissac Lise Marie Jeanette de Baissac was born on 11 May 1905 in Mauritius, which made her a British subject. Of French descent, she was the youngest of three children. In 1919 Lise and her family moved to Paris. When the Germans occupied Paris in 1940 Jean, her eldest brother, joined the British Army while Lise and her youngest brother, Claude, travelled for six months through Spain, Portugal and Gibraltar before arriving in Britain. In Britain, Claude was recruited by the SOE while initially Lise worked at the Daily Sketch newspaper. Soon, Lise joined Claude in the SOE. However, instead of being trained for the usual roles of courier or wireless operator, Lise was instructed to create her own resistance circuit.

complete security for material help and information on local details, and to organise the pickup of arms drops from Britain to assist the French resistance.

Lise trained with Mary Herbert, Jacqueline Nearne and Odette Sansom. She impressed her trainers with her ability and her imperturbable, cool reactions. They regarded her as intelligent, strong-minded and decisive, with a flair for organisation.

Cover stories were vital to SOE agents. For her cover story Lise was Madame Irene Brisse, a poor widow from Paris, seeking refuge in the provinces from the tension of life in the capital. She moved into an apartment on a busy street near the Gestapo HQ, and became acquainted with the Gestapo chief, Herr Grabowski.

On 24 September 1942, Lise and AndrĂŠe Borrel were the first female SOE agents to parachute into France. The agents jumped from a Whitley bomber and landed in the village of Boisrenard near the town of Mer. Their mission was to establish a safe house in Poitiers where new agents could settle into their secret lives.

Posing as an amateur archeologist, Lise cycled around the countryside to reconnoitre possible parachute drop-zones and landing areas for the RAF. When local networks collapsed and the Gestapo closed in, Lise was flown back to Britain. There, while assisting new recruits in training, she broke her leg.

Liseâ&#x20AC;&#x2122;s role was to form a new circuit and to establish a centre where agents could go with