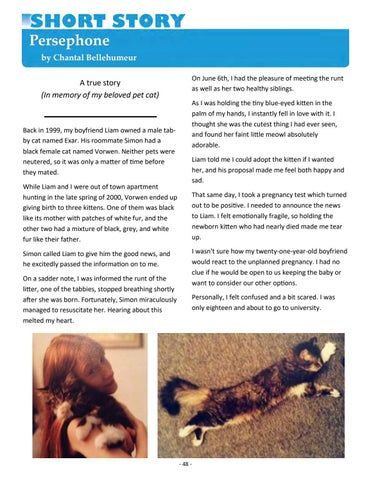 Persephone by Chantal Bellehumeur On June 6th, I had the pleasure of meeting the runt as well as her two healthy siblings.

A true story (In memory of my beloved pet cat)

As I was holding the tiny blue-eyed kitten in the palm of my hands, I instantly fell in love with it. I thought she was the cutest thing I had ever seen, and found her faint little meowl absolutely adorable.

Back in 1999, my boyfriend Liam owned a male tabby cat named Exar. His roommate Simon had a black female cat named Vorwen. Neither pets were neutered, so it was only a matter of time before they mated.

Liam told me I could adopt the kitten if I wanted her, and his proposal made me feel both happy and sad.

While Liam and I were out of town apartment hunting in the late spring of 2000, Vorwen ended up giving birth to three kittens. One of them was black like its mother with patches of white fur, and the other two had a mixture of black, grey, and white fur like their father.

That same day, I took a pregnancy test which turned out to be positive. I needed to announce the news to Liam. I felt emotionally fragile, so holding the newborn kitten who had nearly died made me tear up.

I wasn&#39;t sure how my twenty-one-year-old boyfriend would react to the unplanned pregnancy. I had no clue if he would be open to us keeping the baby or want to consider our other options.

Simon called Liam to give him the good news, and he excitedly passed the information on to me. On a sadder note, I was informed the runt of the litter, one of the tabbies, stopped breathing shortly after she was born. Fortunately, Simon miraculously managed to resuscitate her. Hearing about this melted my heart.

Personally, I felt confused and a bit scared. I was only eighteen and about to go to university.

In this month’s issue of our popular eMagazine… An exclusive interview with author, playwright and journalist Tim Walker featuring his meetings with a range of movie stars Short Stories Poetry New Releases Travel Activities Author Resources And so much more!