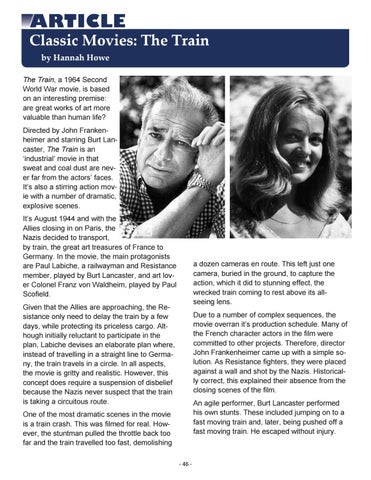 Classic Movies: The Train by Hannah Howe The Train, a 1964 Second World War movie, is based on an interesting premise: are great works of art more valuable than human life? Directed by John Frankenheimer and starring Burt Lancaster, The Train is an ‘industrial’ movie in that sweat and coal dust are never far from the actors’ faces. It’s also a stirring action movie with a number of dramatic, explosive scenes. It’s August 1944 and with the Allies closing in on Paris, the Nazis decided to transport, by train, the great art treasures of France to Germany. In the movie, the main protagonists are Paul Labiche, a railwayman and Resistance member, played by Burt Lancaster, and art lover Colonel Franz von Waldheim, played by Paul Scofield.

a dozen cameras en route. This left just one camera, buried in the ground, to capture the action, which it did to stunning effect, the wrecked train coming to rest above its allseeing lens.

Given that the Allies are approaching, the Resistance only need to delay the train by a few days, while protecting its priceless cargo. Although initially reluctant to participate in the plan, Labiche devises an elaborate plan where, instead of travelling in a straight line to Germany, the train travels in a circle. In all aspects, the movie is gritty and realistic. However, this concept does require a suspension of disbelief because the Nazis never suspect that the train is taking a circuitous route.

Due to a number of complex sequences, the movie overran it’s production schedule. Many of the French character actors in the film were committed to other projects. Therefore, director John Frankenheimer came up with a simple solution. As Resistance fighters, they were placed against a wall and shot by the Nazis. Historically correct, this explained their absence from the closing scenes of the film.

One of the most dramatic scenes in the movie is a train crash. This was filmed for real. However, the stuntman pulled the throttle back too far and the train travelled too fast, demolishing - 46 -

The October 2020 issue of our Amazon #1 eMagazine. In this issue... Hawthorne, The Bride of the Hedgerow Young Writers Six Months of Lockdown Women of Courage The Matchgirls Memorial Movies Poetry Short Stories Photography And so much more!

Hawthorn: The Bride of the Hedgerow

I Love to Play Rugby by Shane (Age 8

The Wild Hedge by Stan Phillips

More Than Waffles and Bacon by Sue DeCrescenzo

The Phone Call by Val Tobin

Finding the Woo by Shelly Knox

Another Dream by Stan Phillips