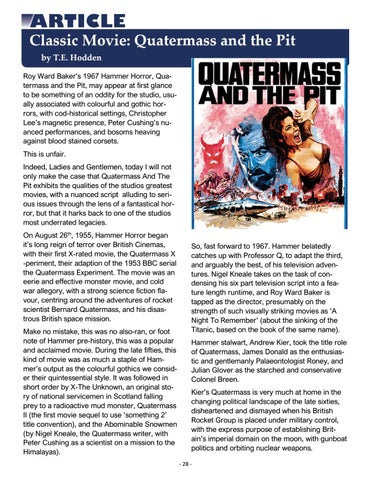 Classic Movie: Quatermass and the Pit by T.E. Hodden Roy Ward Baker’s 1967 Hammer Horror, Quatermass and the Pit, may appear at first glance to be something of an oddity for the studio, usually associated with colourful and gothic horrors, with cod-historical settings, Christopher Lee’s magnetic presence, Peter Cushing’s nuanced performances, and bosoms heaving against blood stained corsets. This is unfair. Indeed, Ladies and Gentlemen, today I will not only make the case that Quatermass And The Pit exhibits the qualities of the studios greatest movies, with a nuanced script alluding to serious issues through the lens of a fantastical horror, but that it harks back to one of the studios most underrated legacies.

On August 26th, 1955, Hammer Horror began it’s long reign of terror over British Cinemas, with their first X-rated movie, the Quatermass X -periment, their adaption of the 1953 BBC serial the Quatermass Experiment. The movie was an eerie and effective monster movie, and cold war allegory, with a strong science fiction flavour, centring around the adventures of rocket scientist Bernard Quatermass, and his disastrous British space mission. Make no mistake, this was no also-ran, or foot note of Hammer pre-history, this was a popular and acclaimed movie. During the late fifties, this kind of movie was as much a staple of Hammer’s output as the colourful gothics we consider their quintessential style. It was followed in short order by X-The Unknown, an original story of national servicemen in Scotland falling prey to a radioactive mud monster, Quatermass II (the first movie sequel to use ‘something 2’ title convention), and the Abominable Snowmen (by Nigel Kneale, the Quatermass writer, with Peter Cushing as a scientist on a mission to the Himalayas).

So, fast forward to 1967. Hammer belatedly catches up with Professor Q, to adapt the third, and arguably the best, of his television adventures. Nigel Kneale takes on the task of condensing his six part television script into a feature length runtime, and Roy Ward Baker is tapped as the director, presumably on the strength of such visually striking movies as ‘A Night To Remember’ (about the sinking of the Titanic, based on the book of the same name). Hammer stalwart, Andrew Kier, took the title role of Quatermass, James Donald as the enthusiastic and gentlemanly Palaeontologist Roney, and Julian Glover as the starched and conservative Colonel Breen. Kier’s Quatermass is very much at home in the changing political landscape of the late sixties, disheartened and dismayed when his British Rocket Group is placed under military control, with the express purpose of establishing Britain’s imperial domain on the moon, with gunboat politics and orbiting nuclear weapons. - 28 -

The October 2020 issue of our Amazon #1 eMagazine. In this issue... Hawthorne, The Bride of the Hedgerow Young Writers Six Months of Lockdown Women of Courage The Matchgirls Memorial Movies Poetry Short Stories Photography And so much more!

Hawthorn: The Bride of the Hedgerow

I Love to Play Rugby by Shane (Age 8

The Wild Hedge by Stan Phillips

More Than Waffles and Bacon by Sue DeCrescenzo

The Phone Call by Val Tobin

Finding the Woo by Shelly Knox

Another Dream by Stan Phillips