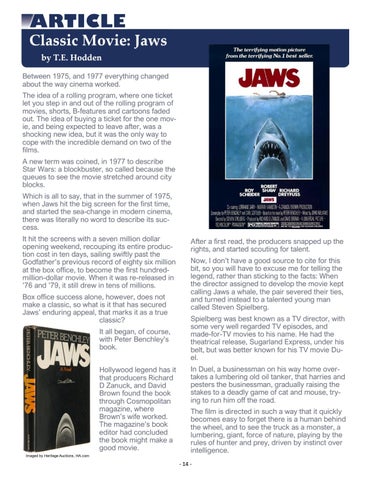 Classic Movie: Jaws by T.E. Hodden Between 1975, and 1977 everything changed about the way cinema worked. The idea of a rolling program, where one ticket let you step in and out of the rolling program of movies, shorts, B-features and cartoons faded out. The idea of buying a ticket for the one movie, and being expected to leave after, was a shocking new idea, but it was the only way to cope with the incredible demand on two of the films. A new term was coined, in 1977 to describe Star Wars: a blockbuster, so called because the queues to see the movie stretched around city blocks. Which is all to say, that in the summer of 1975, when Jaws hit the big screen for the first time, and started the sea-change in modern cinema, there was literally no word to describe its success. It hit the screens with a seven million dollar opening weekend, recouping its entire production cost in ten days, sailing swiftly past the Godfather’s previous record of eighty six million at the box office, to become the first hundredmillion-dollar movie. When it was re-released in ’76 and ’79, it still drew in tens of millions. Box office success alone, however, does not make a classic, so what is it that has secured Jaws’ enduring appeal, that marks it as a true classic? It all began, of course, with Peter Benchley’s book. Hollywood legend has it that producers Richard D Zanuck, and David Brown found the book through Cosmopolitan magazine, where Brown’s wife worked. The magazine’s book editor had concluded the book might make a good movie.

After a first read, the producers snapped up the rights, and started scouting for talent. Now, I don’t have a good source to cite for this bit, so you will have to excuse me for telling the legend, rather than sticking to the facts: When the director assigned to develop the movie kept calling Jaws a whale, the pair severed their ties, and turned instead to a talented young man called Steven Spielberg. Spielberg was best known as a TV director, with some very well regarded TV episodes, and made-for-TV movies to his name. He had the theatrical release, Sugarland Express, under his belt, but was better known for his TV movie Duel. In Duel, a businessman on his way home overtakes a lumbering old oil tanker, that harries and pesters the businessman, gradually raising the stakes to a deadly game of cat and mouse, trying to run him off the road. The film is directed in such a way that it quickly becomes easy to forget there is a human behind the wheel, and to see the truck as a monster, a lumbering, giant, force of nature, playing by the rules of hunter and prey, driven by instinct over intelligence. - 14 -

In this month’s issue of our Amazon #1 ranked magazine... Celebrating the Little Things Things Children Say A Young Writer’s View of Our Oceans Nature Poetry Art Classic Movies And so much more!

Sam and Isabella: An Encounter by Ross G. Homer 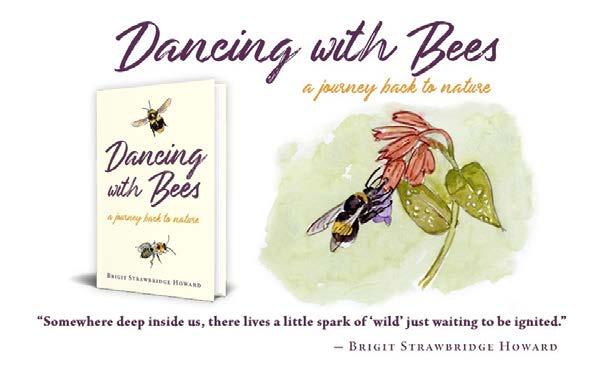 An Introduction to Psychic Protection by Val Tobin

Exploiting the Back Rank Supplied by Chess.com

Art of the Everyday by Christine Southworth

Windowsills Are for Cats by John Greeves

A Walk in Cologne by John Greeves

Things to Celebrate in November by Poppy Flynn 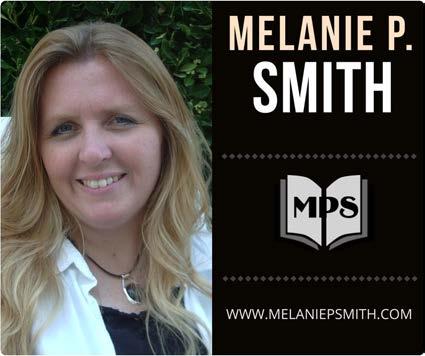 My Imagination by Stan Phillips

Mister Sleepy: Sleeping the Day Away by Jane Alice