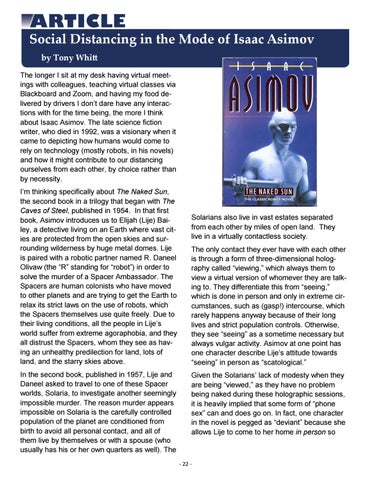 Social Distancing in the Mode of Isaac Asimov by Tony Whitt The longer I sit at my desk having virtual meetings with colleagues, teaching virtual classes via Blackboard and Zoom, and having my food delivered by drivers I don’t dare have any interactions with for the time being, the more I think about Isaac Asimov. The late science fiction writer, who died in 1992, was a visionary when it came to depicting how humans would come to rely on technology (mostly robots, in his novels) and how it might contribute to our distancing ourselves from each other, by choice rather than by necessity. I’m thinking specifically about The Naked Sun, the second book in a trilogy that began with The Caves of Steel, published in 1954. In that first book, Asimov introduces us to Elijah (Lije) Bailey, a detective living on an Earth where vast cities are protected from the open skies and surrounding wilderness by huge metal domes. Lije is paired with a robotic partner named R. Daneel Olivaw (the “R” standing for “robot”) in order to solve the murder of a Spacer Ambassador. The Spacers are human colonists who have moved to other planets and are trying to get the Earth to relax its strict laws on the use of robots, which the Spacers themselves use quite freely. Due to their living conditions, all the people in Lije’s world suffer from extreme agoraphobia, and they all distrust the Spacers, whom they see as having an unhealthy predilection for land, lots of land, and the starry skies above. In the second book, published in 1957, Lije and Daneel asked to travel to one of these Spacer worlds, Solaria, to investigate another seemingly impossible murder. The reason murder appears impossible on Solaria is the carefully controlled population of the planet are conditioned from birth to avoid all personal contact, and all of them live by themselves or with a spouse (who usually has his or her own quarters as well). The

Solarians also live in vast estates separated from each other by miles of open land. They live in a virtually contactless society. The only contact they ever have with each other is through a form of three-dimensional holography called “viewing,” which always them to view a virtual version of whomever they are talking to. They differentiate this from “seeing,” which is done in person and only in extreme circumstances, such as (gasp!) intercourse, which rarely happens anyway because of their long lives and strict population controls. Otherwise, they see “seeing” as a sometime necessary but always vulgar activity. Asimov at one point has one character describe Lije’s attitude towards “seeing” in person as “scatological.” Given the Solarians’ lack of modesty when they are being “viewed,” as they have no problem being naked during these holographic sessions, it is heavily implied that some form of “phone sex” can and does go on. In fact, one character in the novel is pegged as “deviant” because she allows Lije to come to her home in person so