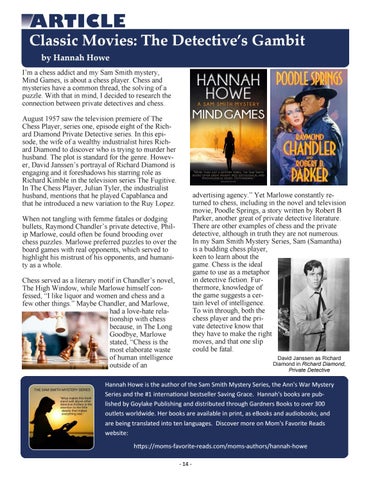 Classic Movies: The Detective’s Gambit by Hannah Howe I’m a chess addict and my Sam Smith mystery, Mind Games, is about a chess player. Chess and mysteries have a common thread, the solving of a puzzle. With that in mind, I decided to research the connection between private detectives and chess. August 1957 saw the television premiere of The Chess Player, series one, episode eight of the Richard Diamond Private Detective series. In this episode, the wife of a wealthy industrialist hires Richard Diamond to discover who is trying to murder her husband. The plot is standard for the genre. However, David Janssen’s portrayal of Richard Diamond is engaging and it foreshadows his starring role as Richard Kimble in the television series The Fugitive. In The Chess Player, Julian Tyler, the industrialist husband, mentions that he played Capablanca and that he introduced a new variation to the Ruy Lopez.

advertising agency.” Yet Marlowe constantly returned to chess, including in the novel and television movie, Poodle Springs, a story written by Robert B Parker, another great of private detective literature. There are other examples of chess and the private detective, although in truth they are not numerous. In my Sam Smith Mystery Series, Sam (Samantha) is a budding chess player, keen to learn about the game. Chess is the ideal game to use as a metaphor in detective fiction. Furthermore, knowledge of the game suggests a certain level of intelligence. To win through, both the chess player and the private detective know that they have to make the right moves, and that one slip could be fatal.

When not tangling with femme fatales or dodging bullets, Raymond Chandler’s private detective, Philip Marlowe, could often be found brooding over chess puzzles. Marlowe preferred puzzles to over the board games with real opponents, which served to highlight his mistrust of his opponents, and humanity as a whole. Chess served as a literary motif in Chandler’s novel, The High Window, while Marlowe himself confessed, “I like liquor and women and chess and a few other things.” Maybe Chandler, and Marlowe, had a love-hate relationship with chess because, in The Long Goodbye, Marlowe stated, “Chess is the most elaborate waste of human intelligence outside of an

Hannah Howe is the author of the Sam Smith Mystery Series, the Ann's War Mystery Series and the #1 international bestseller Saving Grace. Hannah's books are published by Goylake Publishing and distributed through Gardners Books to over 300 outlets worldwide. Her books are available in print, as eBooks and audiobooks, and are being translated into ten languages. Discover more on Mom's Favorite Reads website: https://moms-favorite-reads.com/moms-authors/hannah-howe - 14 -