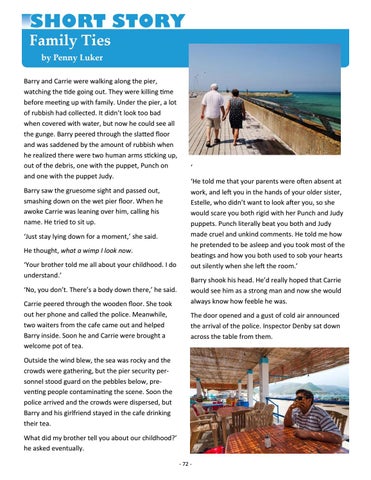 Family Ties by Penny Luker Barry and Carrie were walking along the pier, watching the tide going out. They were killing time before meeting up with family. Under the pier, a lot of rubbish had collected. It didn’t look too bad when covered with water, but now he could see all the gunge. Barry peered through the slatted floor and was saddened by the amount of rubbish when he realized there were two human arms sticking up, out of the debris, one with the puppet, Punch on and one with the puppet Judy. Barry saw the gruesome sight and passed out, smashing down on the wet pier floor. When he awoke Carrie was leaning over him, calling his name. He tried to sit up. ‘Just stay lying down for a moment,’ she said. He thought, what a wimp I look now. ‘Your brother told me all about your childhood. I do understand.’ ‘No, you don’t. There’s a body down there,’ he said.

Carrie peered through the wooden floor. She took out her phone and called the police. Meanwhile, two waiters from the cafe came out and helped Barry inside. Soon he and Carrie were brought a welcome pot of tea.

‘ ‘He told me that your parents were often absent at work, and left you in the hands of your older sister, Estelle, who didn’t want to look after you, so she would scare you both rigid with her Punch and Judy puppets. Punch literally beat you both and Judy made cruel and unkind comments. He told me how he pretended to be asleep and you took most of the beatings and how you both used to sob your hearts out silently when she left the room.’ Barry shook his head. He’d really hoped that Carrie would see him as a strong man and now she would always know how feeble he was. The door opened and a gust of cold air announced the arrival of the police. Inspector Denby sat down across the table from them.

Outside the wind blew, the sea was rocky and the crowds were gathering, but the pier security personnel stood guard on the pebbles below, preventing people contaminating the scene. Soon the police arrived and the crowds were dispersed, but Barry and his girlfriend stayed in the cafe drinking their tea. What did my brother tell you about our childhood?’ he asked eventually. - 72 -