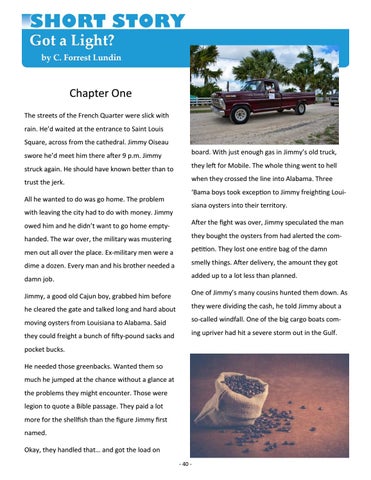 Got a Light? by C. Forrest Lundin

Chapter One The streets of the French Quarter were slick with rain. He’d waited at the entrance to Saint Louis Square, across from the cathedral. Jimmy Oiseau swore he’d meet him there after 9 p.m. Jimmy

board. With just enough gas in Jimmy’s old truck,

struck again. He should have known better than to

they left for Mobile. The whole thing went to hell

when they crossed the line into Alabama. Three

All he wanted to do was go home. The problem

with leaving the city had to do with money. Jimmy

owed him and he didn’t want to go home empty-

After the fight was over, Jimmy speculated the man

handed. The war over, the military was mustering

they bought the oysters from had alerted the com-

men out all over the place. Ex-military men were a

petition. They lost one entire bag of the damn

dime a dozen. Every man and his brother needed a

smelly things. After delivery, the amount they got

added up to a lot less than planned.

Jimmy, a good old Cajun boy, grabbed him before

One of Jimmy’s many cousins hunted them down. As

he cleared the gate and talked long and hard about

they were dividing the cash, he told Jimmy about a

so-called windfall. One of the big cargo boats com-

they could freight a bunch of fifty-pound sacks and

ing upriver had hit a severe storm out in the Gulf.

pocket bucks. He needed those greenbacks. Wanted them so much he jumped at the chance without a glance at

the problems they might encounter. Those were legion to quote a Bible passage. They paid a lot more for the shellfish than the figure Jimmy first named. Okay, they handled that… and got the load on - 40 -