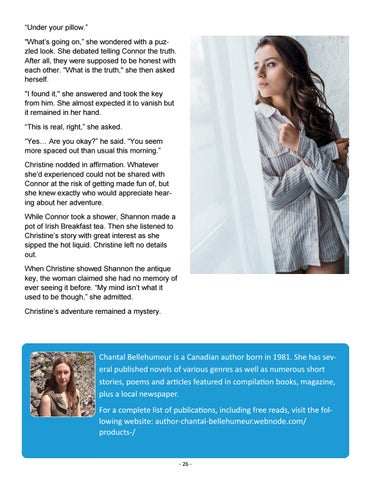 “Under your pillow.” "What’s going on,” she wondered with a puzzled look. She debated telling Connor the truth. After all, they were supposed to be honest with each other. "What is the truth," she then asked herself. "I found it," she answered and took the key from him. She almost expected it to vanish but it remained in her hand.

“This is real, right,” she asked. “Yes… Are you okay?” he said. “You seem more spaced out than usual this morning.” Christine nodded in affirmation. Whatever she’d experienced could not be shared with Connor at the risk of getting made fun of, but she knew exactly who would appreciate hearing about her adventure.

While Connor took a shower, Shannon made a pot of Irish Breakfast tea. Then she listened to Christine’s story with great interest as she sipped the hot liquid. Christine left no details out. When Christine showed Shannon the antique key, the woman claimed she had no memory of ever seeing it before. “My mind isn’t what it used to be though,” she admitted. Christine’s adventure remained a mystery.

Chantal Bellehumeur is a Canadian author born in 1981. She has several published novels of various genres as well as numerous short stories, poems and articles featured in compilation books, magazine, plus a local newspaper. For a complete list of publications, including free reads, visit the following website: author-chantal-bellehumeur.webnode.com/ products-/