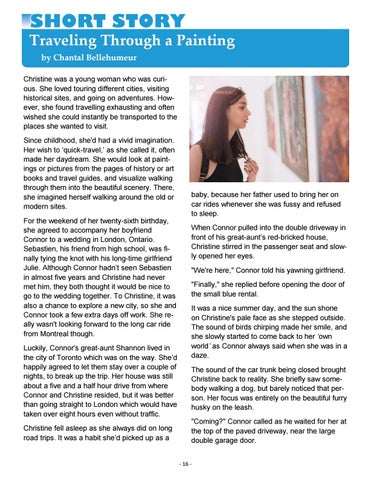 Traveling Through a Painting by Chantal Bellehumeur Christine was a young woman who was curious. She loved touring different cities, visiting historical sites, and going on adventures. However, she found travelling exhausting and often wished she could instantly be transported to the places she wanted to visit. Since childhood, she'd had a vivid imagination. Her wish to ‘quick-travel,’ as she called it, often made her daydream. She would look at paintings or pictures from the pages of history or art books and travel guides, and visualize walking through them into the beautiful scenery. There, she imagined herself walking around the old or modern sites. For the weekend of her twenty-sixth birthday, she agreed to accompany her boyfriend Connor to a wedding in London, Ontario. Sebastien, his friend from high school, was finally tying the knot with his long-time girlfriend Julie. Although Connor hadn’t seen Sebastien in almost five years and Christine had never met him, they both thought it would be nice to go to the wedding together. To Christine, it was also a chance to explore a new city, so she and Connor took a few extra days off work. She really wasn't looking forward to the long car ride from Montreal though. Luckily, Connor's great-aunt Shannon lived in the city of Toronto which was on the way. She’d happily agreed to let them stay over a couple of nights, to break up the trip. Her house was still about a five and a half hour drive from where Connor and Christine resided, but it was better than going straight to London which would have taken over eight hours even without traffic. Christine fell asleep as she always did on long road trips. It was a habit she’d picked up as a

baby, because her father used to bring her on car rides whenever she was fussy and refused to sleep. When Connor pulled into the double driveway in front of his great-aunt’s red-bricked house, Christine stirred in the passenger seat and slowly opened her eyes. "We're here," Connor told his yawning girlfriend. "Finally," she replied before opening the door of the small blue rental. It was a nice summer day, and the sun shone on Christine's pale face as she stepped outside. The sound of birds chirping made her smile, and she slowly started to come back to her ‘own world’ as Connor always said when she was in a daze. The sound of the car trunk being closed brought Christine back to reality. She briefly saw somebody walking a dog, but barely noticed that person. Her focus was entirely on the beautiful furry husky on the leash. "Coming?" Connor called as he waited for her at the top of the paved driveway, near the large double garage door. - 16 -