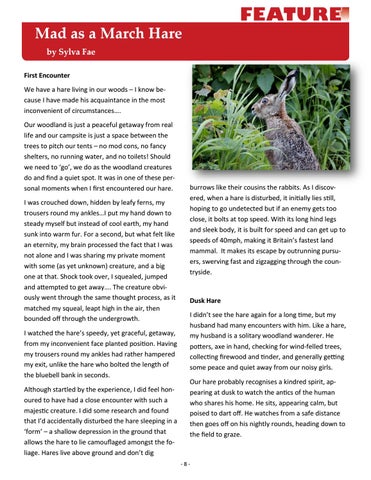 Mad as a March Hare by Sylva Fae First Encounter We have a hare living in our woods – I know because I have made his acquaintance in the most inconvenient of circumstances….

Our woodland is just a peaceful getaway from real life and our campsite is just a space between the trees to pitch our tents – no mod cons, no fancy shelters, no running water, and no toilets! Should we need to ‘go’, we do as the woodland creatures do and find a quiet spot. It was in one of these personal moments when I first encountered our hare. I was crouched down, hidden by leafy ferns, my trousers round my ankles…I put my hand down to steady myself but instead of cool earth, my hand sunk into warm fur. For a second, but what felt like an eternity, my brain processed the fact that I was not alone and I was sharing my private moment with some (as yet unknown) creature, and a big one at that. Shock took over, I squealed, jumped and attempted to get away…. The creature obviously went through the same thought process, as it matched my squeal, leapt high in the air, then bounded off through the undergrowth. I watched the hare’s speedy, yet graceful, getaway, from my inconvenient face planted position. Having my trousers round my ankles had rather hampered my exit, unlike the hare who bolted the length of the bluebell bank in seconds. Although startled by the experience, I did feel honoured to have had a close encounter with such a majestic creature. I did some research and found that I’d accidentally disturbed the hare sleeping in a ‘form’ – a shallow depression in the ground that allows the hare to lie camouflaged amongst the foliage. Hares live above ground and don’t dig

burrows like their cousins the rabbits. As I discovered, when a hare is disturbed, it initially lies still, hoping to go undetected but if an enemy gets too close, it bolts at top speed. With its long hind legs and sleek body, it is built for speed and can get up to speeds of 40mph, making it Britain’s fastest land mammal. It makes its escape by outrunning pursuers, swerving fast and zigzagging through the countryside.

Dusk Hare I didn’t see the hare again for a long time, but my husband had many encounters with him. Like a hare, my husband is a solitary woodland wanderer. He potters, axe in hand, checking for wind-felled trees, collecting firewood and tinder, and generally getting some peace and quiet away from our noisy girls. Our hare probably recognises a kindred spirit, appearing at dusk to watch the antics of the human who shares his home. He sits, appearing calm, but poised to dart off. He watches from a safe distance then goes off on his nightly rounds, heading down to the field to graze.

In our spring issue... A seasonal blend of articles including Mad as a March Hare, Dr Seuss, Reiki, World Wildlife Day, International Day of Forests, plus short stories, recipes, puzzles, humour, photographs and so much more!

Mad as a March Hare

Where Did That Come From? by Wendy H. Jones

Naught But Love by Stan Phillips

What Was I Thinking? by Keith Guernsey

Things to Celebrate in March by Poppy Flynn

Use Reiki to Enhance Psychic Abilities by Val Tobin

A Trip to the Moon for Homework by Navya (Age 6

Writing Your Own Story by John Greeves

Dignity for All by Father Ian Maher

Black to Move Supplied by Chess.com

Women of Courage: Heroines of SOE by Hannah Howe

Man in Green by Stan Phillips