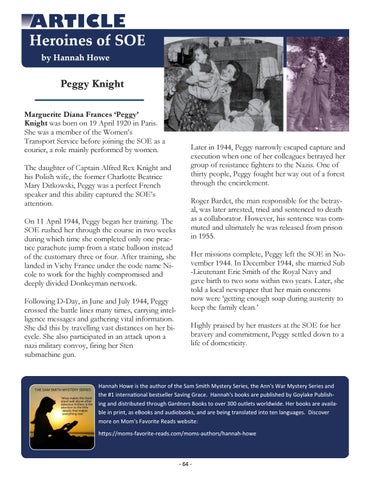 Peggy Knight Marguerite Diana Frances ‘Peggy’ Knight was born on 19 April 1920 in Paris. She was a member of the Women’s Transport Service before joining the SOE as a courier, a role mainly performed by women. The daughter of Captain Alfred Rex Knight and his Polish wife, the former Charlotte Beatrice Mary Ditkowski, Peggy was a perfect French speaker and this ability captured the SOE’s attention. On 11 April 1944, Peggy began her training. The SOE rushed her through the course in two weeks during which time she completed only one practice parachute jump from a static balloon instead of the customary three or four. After training, she landed in Vichy France under the code name Nicole to work for the highly compromised and deeply divided Donkeyman network.

Following D-Day, in June and July 1944, Peggy crossed the battle lines many times, carrying intelligence messages and gathering vital information. She did this by travelling vast distances on her bicycle. She also participated in an attack upon a nazi military convoy, firing her Sten submachine gun.

Later in 1944, Peggy narrowly escaped capture and execution when one of her colleagues betrayed her group of resistance fighters to the Nazis. One of thirty people, Peggy fought her way out of a forest through the encirclement. Roger Bardet, the man responsible for the betrayal, was later arrested, tried and sentenced to death as a collaborator. However, his sentence was commuted and ultimately he was released from prison in 1955. Her missions complete, Peggy left the SOE in November 1944. In December 1944, she married Sub -Lieutenant Eric Smith of the Royal Navy and gave birth to two sons within two years. Later, she told a local newspaper that her main concerns now were ‘getting enough soap during austerity to keep the family clean.’ Highly praised by her masters at the SOE for her bravery and commitment, Peggy settled down to a life of domesticity.

Hannah Howe is the author of the Sam Smith Mystery Series, the Ann's War Mystery Series and the #1 international bestseller Saving Grace. Hannah's books are published by Goylake Publishing and distributed through Gardners Books to over 300 outlets worldwide. Her books are available in print, as eBooks and audiobooks, and are being translated into ten languages. Discover more on Mom's Favorite Reads website: https://moms-favorite-reads.com/moms-authors/hannah-howe