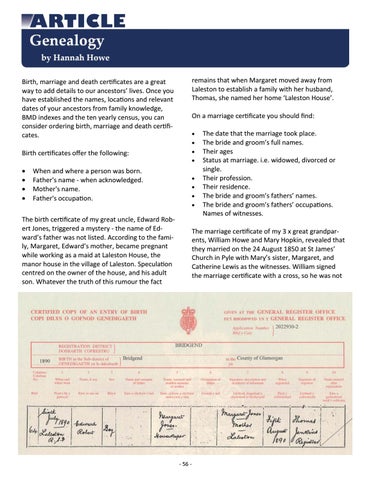 Genealogy by Hannah Howe remains that when Margaret moved away from Laleston to establish a family with her husband, Thomas, she named her home ‘Laleston House’.

On a marriage certificate you should find: • • • •

When and where a person was born. Father's name - when acknowledged. Mother's name. Father's occupation.

The birth certificate of my great uncle, Edward Robert Jones, triggered a mystery - the name of Edward’s father was not listed. According to the family, Margaret, Edward’s mother, became pregnant while working as a maid at Laleston House, the manor house in the village of Laleston. Speculation centred on the owner of the house, and his adult son. Whatever the truth of this rumour the fact