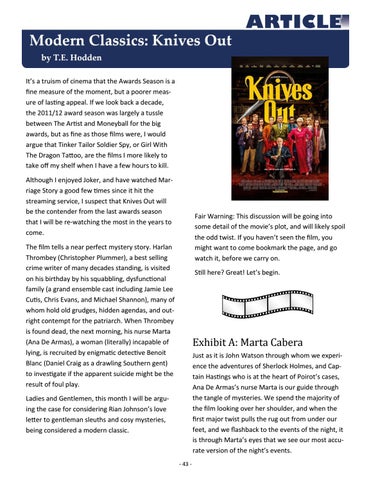 Modern Classics: Knives Out by T.E. Hodden It’s a truism of cinema that the Awards Season is a fine measure of the moment, but a poorer measure of lasting appeal. If we look back a decade, the 2011/12 award season was largely a tussle between The Artist and Moneyball for the big awards, but as fine as those films were, I would argue that Tinker Tailor Soldier Spy, or Girl With The Dragon Tattoo, are the films I more likely to take off my shelf when I have a few hours to kill. Although I enjoyed Joker, and have watched Marriage Story a good few times since it hit the streaming service, I suspect that Knives Out will be the contender from the last awards season that I will be re-watching the most in the years to come.

Fair Warning: This discussion will be going into some detail of the movie’s plot, and will likely spoil the odd twist. If you haven’t seen the film, you might want to come bookmark the page, and go watch it, before we carry on.

The film tells a near perfect mystery story. Harlan Thrombey (Christopher Plummer), a best selling crime writer of many decades standing, is visited on his birthday by his squabbling, dysfunctional family (a grand ensemble cast including Jamie Lee Cutis, Chris Evans, and Michael Shannon), many of whom hold old grudges, hidden agendas, and outright contempt for the patriarch. When Thrombey is found dead, the next morning, his nurse Marta (Ana De Armas), a woman (literally) incapable of lying, is recruited by enigmatic detective Benoit Blanc (Daniel Craig as a drawling Southern gent) to investigate if the apparent suicide might be the result of foul play.

Just as it is John Watson through whom we experience the adventures of Sherlock Holmes, and Captain Hastings who is at the heart of Poirot’s cases, Ana De Armas’s nurse Marta is our guide through the tangle of mysteries. We spend the majority of the film looking over her shoulder, and when the first major twist pulls the rug out from under our feet, and we flashback to the events of the night, it is through Marta’s eyes that we see our most accurate version of the night’s events.

Ladies and Gentlemen, this month I will be arguing the case for considering Rian Johnson’s love letter to gentleman sleuths and cosy mysteries, being considered a modern classic.