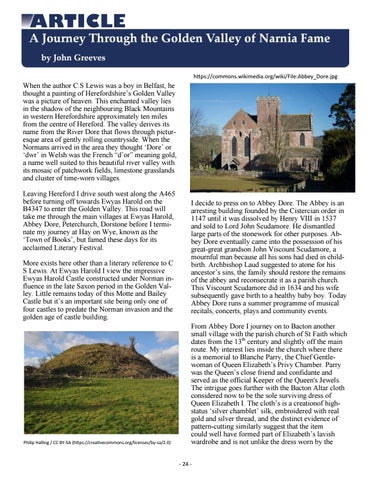 A Journey Through the Golden Valley of Narnia Fame by John Greeves https://commons.wikimedia.org/wiki/File:Abbey_Dore.jpg

When the author C.S Lewis was a boy in Belfast, he thought a painting of Herefordshire’s Golden Valley was a picture of heaven. This enchanted valley lies in the shadow of the neighbouring Black Mountains in western Herefordshire approximately ten miles from the centre of Hereford. The valley derives its name from the River Dore that flows through picturesque area of gently rolling countryside. When the Normans arrived in the area they thought ‘Dore’ or ‘dwr’ in Welsh was the French “d’or” meaning gold, a name well suited to this beautiful river valley with its mosaic of patchwork fields, limestone grasslands and cluster of time-worn villages. Leaving Hereford I drive south west along the A465 before turning off towards Ewyas Harold on the B4347 to enter the Golden Valley. This road will take me through the main villages at Ewyas Harold, Abbey Dore, Peterchurch, Dorstone before I terminate my journey at Hay on Wye, known as the ‘Town of Books’, but famed these days for its acclaimed Literary Festival. More exists here other than a literary reference to C S Lewis. At Ewyas Harold I view the impressive Ewyas Harold Castle constructed under Norman influence in the late Saxon period in the Golden Valley. Little remains today of this Motte and Bailey Castle but it’s an important site being only one of four castles to predate the Norman invasion and the golden age of castle building.

I decide to press on to Abbey Dore. The Abbey is an arresting building founded by the Cistercian order in 1147 until it was dissolved by Henry VIII in 1537 and sold to Lord John Scudamore. He dismantled large parts of the stonework for other purposes. Abbey Dore eventually came into the possession of his great-great grandson John Viscount Scudamore, a mournful man because all his sons had died in childbirth. Archbishop Laud suggested to atone for his ancestor’s sins, the family should restore the remains of the abbey and reconsecrate it as a parish church. This Viscount Scudamore did in 1634 and his wife subsequently gave birth to a healthy baby boy. Today Abbey Dore runs a summer programme of musical recitals, concerts, plays and community events. From Abbey Dore I journey on to Bacton another small village with the parish church of St Faith which dates from the 13th century and slightly off the main route. My interest lies inside the church where there is a memorial to Blanche Parry, the Chief Gentlewoman of Queen Elizabeth’s Privy Chamber. Parry was the Queen’s close friend and confidante and served as the official Keeper of the Queen's Jewels. The intrigue goes further with the Bacton Altar cloth considered now to be the sole surviving dress of Queen Elizabeth I. The cloth’s is a creationof highstatus ‘silver chamblet’ silk, embroidered with real gold and silver thread, and the distinct evidence of pattern-cutting similarly suggest that the item could well have formed part of Elizabeth’s lavish wardrobe and is not unlike the dress worn by the - 24 -