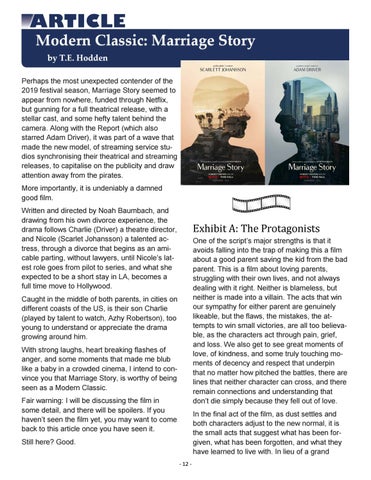 Modern Classic: Marriage Story by T.E. Hodden Perhaps the most unexpected contender of the 2019 festival season, Marriage Story seemed to appear from nowhere, funded through Netflix, but gunning for a full theatrical release, with a stellar cast, and some hefty talent behind the camera. Along with the Report (which also starred Adam Driver), it was part of a wave that made the new model, of streaming service studios synchronising their theatrical and streaming releases, to capitalise on the publicity and draw attention away from the pirates. More importantly, it is undeniably a damned good film. Written and directed by Noah Baumbach, and drawing from his own divorce experience, the drama follows Charlie (Driver) a theatre director, and Nicole (Scarlet Johansson) a talented actress, through a divorce that begins as an amicable parting, without lawyers, until Nicole’s latest role goes from pilot to series, and what she expected to be a short stay in LA, becomes a full time move to Hollywood.

Exhibit A: The Protagonists

One of the script’s major strengths is that it avoids falling into the trap of making this a film about a good parent saving the kid from the bad parent. This is a film about loving parents, struggling with their own lives, and not always dealing with it right. Neither is blameless, but neither is made into a villain. The acts that win our sympathy for either parent are genuinely likeable, but the flaws, the mistakes, the attempts to win small victories, are all too believable, as the characters act through pain, grief, and loss. We also get to see great moments of love, of kindness, and some truly touching moments of decency and respect that underpin that no matter how pitched the battles, there are lines that neither character can cross, and there remain connections and understanding that don’t die simply because they fell out of love.

Caught in the middle of both parents, in cities on different coasts of the US, is their son Charlie (played by talent to watch, Azhy Robertson), too young to understand or appreciate the drama growing around him. With strong laughs, heart breaking flashes of anger, and some moments that made me blub like a baby in a crowded cinema, I intend to convince you that Marriage Story, is worthy of being seen as a Modern Classic. Fair warning: I will be discussing the film in some detail, and there will be spoilers. If you haven’t seen the film yet, you may want to come back to this article once you have seen it.

In the final act of the film, as dust settles and both characters adjust to the new normal, it is the small acts that suggest what has been forgiven, what has been forgotten, and what they have learned to live with. In lieu of a grand

In this issue... Lockdown for Teenagers Modern Movie Classics Photography Articles Poems Humour Puzzles Young Writers And an insight into the Month of June