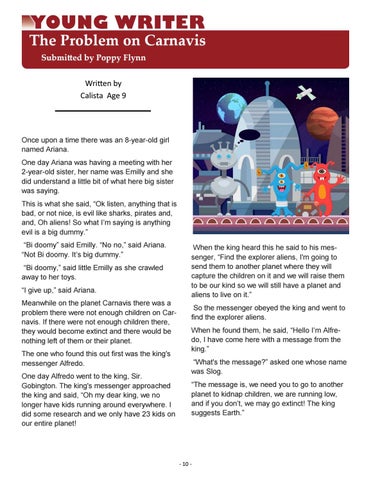 Once upon a time there was an 8-year-old girl named Ariana. One day Ariana was having a meeting with her 2-year-old sister, her name was Emilly and she did understand a little bit of what here big sister was saying. This is what she said, “Ok listen, anything that is bad, or not nice, is evil like sharks, pirates and, and, Oh aliens! So what I’m saying is anything evil is a big dummy.” “Bi doomy” said Emilly. “No no,” said Ariana. “Not Bi doomy. It’s big dummy.” “Bi doomy,” said little Emilly as she crawled away to her toys. “I give up,” said Ariana.

Meanwhile on the planet Carnavis there was a problem there were not enough children on Carnavis. If there were not enough children there, they would become extinct and there would be nothing left of them or their planet. The one who found this out first was the king&#39;s messenger Alfredo. One day Alfredo went to the king, Sir. Gobington. The king&#39;s messenger approached the king and said, “Oh my dear king, we no longer have kids running around everywhere. I did some research and we only have 23 kids on our entire planet!

When the king heard this he said to his messenger, “Find the explorer aliens, I&#39;m going to send them to another planet where they will capture the children on it and we will raise them to be our kind so we will still have a planet and aliens to live on it.” So the messenger obeyed the king and went to find the explorer aliens. When he found them, he said, “Hello I’m Alfredo, I have come here with a message from the king.” “What&#39;s the message?” asked one whose name was Slog. “The message is, we need you to go to another planet to kidnap children, we are running low, and if you don’t, we may go extinct! The king suggests Earth.”

In this issue... Lockdown for Teenagers Modern Movie Classics Photography Articles Poems Humour Puzzles Young Writers And an insight into the Month of June