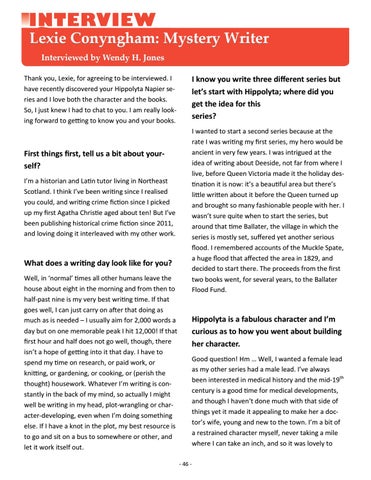 Lexie Conyngham: Mystery Writer Interviewed by Wendy H. Jones I know you write three different series but let’s start with Hippolyta; where did you get the idea for this series?

Thank you, Lexie, for agreeing to be interviewed. I have recently discovered your Hippolyta Napier series and I love both the character and the books. So, I just knew I had to chat to you. I am really looking forward to getting to know you and your books.

I wanted to start a second series because at the rate I was writing my first series, my hero would be ancient in very few years. I was intrigued at the idea of writing about Deeside, not far from where I live, before Queen Victoria made it the holiday destination it is now: it’s a beautiful area but there’s little written about it before the Queen turned up and brought so many fashionable people with her. I wasn’t sure quite when to start the series, but around that time Ballater, the village in which the series is mostly set, suffered yet another serious flood. I remembered accounts of the Muckle Spate, a huge flood that affected the area in 1829, and decided to start there. The proceeds from the first two books went, for several years, to the Ballater Flood Fund.

First things first, tell us a bit about yourself? I’m a historian and Latin tutor living in Northeast Scotland. I think I’ve been writing since I realised you could, and writing crime fiction since I picked up my first Agatha Christie aged about ten! But I’ve been publishing historical crime fiction since 2011, and loving doing it interleaved with my other work.

What does a writing day look like for you? Well, in ‘normal’ times all other humans leave the house about eight in the morning and from then to half-past nine is my very best writing time. If that goes well, I can just carry on after that doing as much as is needed – I usually aim for 2,000 words a day but on one memorable peak I hit 12,000! If that first hour and half does not go well, though, there isn’t a hope of getting into it that day. I have to spend my time on research, or paid work, or knitting, or gardening, or cooking, or (perish the thought) housework. Whatever I’m writing is constantly in the back of my mind, so actually I might well be writing in my head, plot-wrangling or character-developing, even when I’m doing something else. If I have a knot in the plot, my best resource is to go and sit on a bus to somewhere or other, and let it work itself out.

Hippolyta is a fabulous character and I’m curious as to how you went about building her character. Good question! Hm … Well, I wanted a female lead as my other series had a male lead. I’ve always been interested in medical history and the mid-19th century is a good time for medical developments, and though I haven’t done much with that side of things yet it made it appealing to make her a doctor’s wife, young and new to the town. I’m a bit of a restrained character myself, never taking a mile where I can take an inch, and so it was lovely to - 46 -