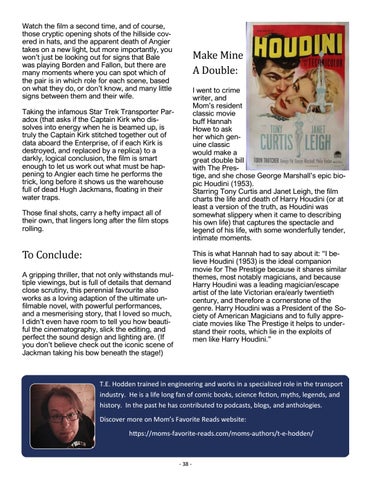 Watch the film a second time, and of course, those cryptic opening shots of the hillside covered in hats, and the apparent death of Angier takes on a new light, but more importantly, you won’t just be looking out for signs that Bale was playing Borden and Fallon, but there are many moments where you can spot which of the pair is in which role for each scene, based on what they do, or don’t know, and many little signs between them and their wife.

Make Mine A Double:

I went to crime writer, and Mom’s resident classic movie buff Hannah Howe to ask her which genuine classic would make a great double bill with The Prestige, and she chose George Marshall’s epic biopic Houdini (1953). Starring Tony Curtis and Janet Leigh, the film charts the life and death of Harry Houdini (or at least a version of the truth, as Houdini was somewhat slippery when it came to describing his own life) that captures the spectacle and legend of his life, with some wonderfully tender, intimate moments.

Taking the infamous Star Trek Transporter Paradox (that asks if the Captain Kirk who dissolves into energy when he is beamed up, is truly the Captain Kirk stitched together out of data aboard the Enterprise, of if each Kirk is destroyed, and replaced by a replica) to a darkly, logical conclusion, the film is smart enough to let us work out what must be happening to Angier each time he performs the trick, long before it shows us the warehouse full of dead Hugh Jackmans, floating in their water traps.

Those final shots, carry a hefty impact all of their own, that lingers long after the film stops rolling.

This is what Hannah had to say about it: “I believe Houdini (1953) is the ideal companion movie for The Prestige because it shares similar themes, most notably magicians, and because Harry Houdini was a leading magician/escape artist of the late Victorian era/early twentieth century, and therefore a cornerstone of the genre. Harry Houdini was a President of the Society of American Magicians and to fully appreciate movies like The Prestige it helps to understand their roots, which lie in the exploits of men like Harry Houdini.”

A gripping thriller, that not only withstands multiple viewings, but is full of details that demand close scrutiny, this perennial favourite also works as a loving adaption of the ultimate unfilmable novel, with powerful performances, and a mesmerising story, that I loved so much, I didn’t even have room to tell you how beautiful the cinematography, slick the editing, and perfect the sound design and lighting are. (If you don’t believe check out the iconic scene of Jackman taking his bow beneath the stage!)

T.E. Hodden trained in engineering and works in a specialized role in the transport industry. He is a life long fan of comic books, science fiction, myths, legends, and history. In the past he has contributed to podcasts, blogs, and anthologies. Discover more on Mom’s Favorite Reads website: https://moms-favorite-reads.com/moms-authors/t-e-hodden/