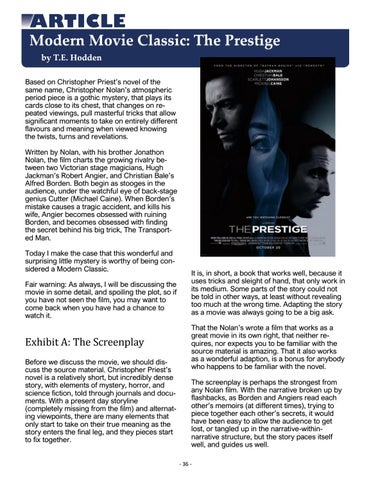 Modern Movie Classic: The Prestige by T.E. Hodden Based on Christopher Priest’s novel of the same name, Christopher Nolan’s atmospheric period piece is a gothic mystery, that plays its cards close to its chest, that changes on repeated viewings, pull masterful tricks that allow significant moments to take on entirely different flavours and meaning when viewed knowing the twists, turns and revelations. Written by Nolan, with his brother Jonathon Nolan, the film charts the growing rivalry between two Victorian stage magicians, Hugh Jackman’s Robert Angier, and Christian Bale’s Alfred Borden. Both begin as stooges in the audience, under the watchful eye of back-stage genius Cutter (Michael Caine). When Borden’s mistake causes a tragic accident, and kills his wife, Angier becomes obsessed with ruining Borden, and becomes obsessed with finding the secret behind his big trick, The Transported Man. Today I make the case that this wonderful and surprising little mystery is worthy of being considered a Modern Classic. Fair warning: As always, I will be discussing the movie in some detail, and spoiling the plot, so if you have not seen the film, you may want to come back when you have had a chance to watch it.

It is, in short, a book that works well, because it uses tricks and sleight of hand, that only work in its medium. Some parts of the story could not be told in other ways, at least without revealing too much at the wrong time. Adapting the story as a movie was always going to be a big ask.

Exhibit A: The Screenplay

Before we discuss the movie, we should discuss the source material. Christopher Priest’s novel is a relatively short, but incredibly dense story, with elements of mystery, horror, and science fiction, told through journals and documents. With a present day storyline (completely missing from the film) and alternating viewpoints, there are many elements that only start to take on their true meaning as the story enters the final leg, and they pieces start to fix together.

The screenplay is perhaps the strongest from any Nolan film. With the narrative broken up by flashbacks, as Borden and Angiers read each other’s memoirs (at different times), trying to piece together each other’s secrets, it would have been easy to allow the audience to get lost, or tangled up in the narrative-withinnarrative structure, but the story paces itself well, and guides us well. - 36 -