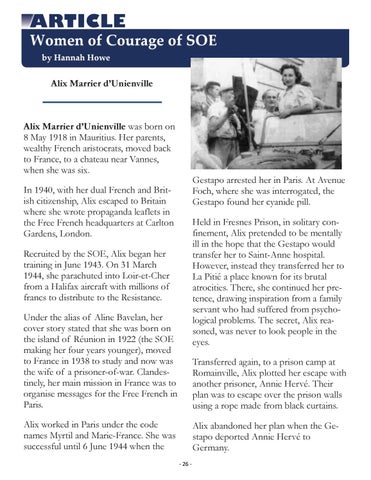 Women of Courage of SOE by Hannah Howe

Alix Marrier d’Unienville was born on 8 May 1918 in Mauritius. Her parents, wealthy French aristocrats, moved back to France, to a chateau near Vannes, when she was six.

Gestapo arrested her in Paris. At Avenue Foch, where she was interrogated, the Gestapo found her cyanide pill.

In 1940, with her dual French and British citizenship, Alix escaped to Britain where she wrote propaganda leaflets in the Free French headquarters at Carlton Gardens, London.

Held in Fresnes Prison, in solitary confinement, Alix pretended to be mentally ill in the hope that the Gestapo would transfer her to Saint-Anne hospital. However, instead they transferred her to La Pitié a place known for its brutal atrocities. There, she continued her pretence, drawing inspiration from a family servant who had suffered from psychological problems. The secret, Alix reasoned, was never to look people in the eyes.

Recruited by the SOE, Alix began her training in June 1943. On 31 March 1944, she parachuted into Loir-et-Cher from a Halifax aircraft with millions of francs to distribute to the Resistance. Under the alias of Aline Bavelan, her cover story stated that she was born on the island of Réunion in 1922 (the SOE making her four years younger), moved to France in 1938 to study and now was the wife of a prisoner-of-war. Clandestinely, her main mission in France was to organise messages for the Free French in Paris.

Transferred again, to a prison camp at Romainville, Alix plotted her escape with another prisoner, Annie Hervé. Their plan was to escape over the prison walls using a rope made from black curtains.

Alix worked in Paris under the code names Myrtil and Marie-France. She was successful until 6 June 1944 when the

Alix abandoned her plan when the Gestapo deported Annie Hervé to Germany. - 26 -