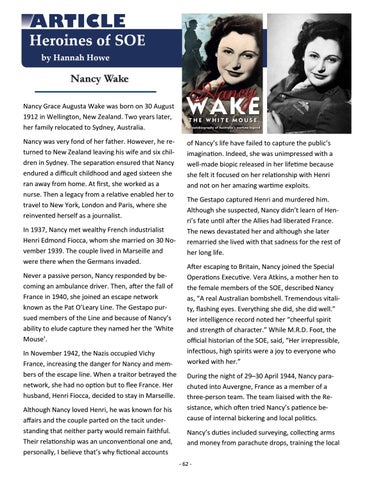 Nancy Wake Nancy Grace Augusta Wake was born on 30 August 1912 in Wellington, New Zealand. Two years later, her family relocated to Sydney, Australia. Nancy was very fond of her father. However, he returned to New Zealand leaving his wife and six children in Sydney. The separation ensured that Nancy endured a difficult childhood and aged sixteen she ran away from home. At first, she worked as a nurse. Then a legacy from a relative enabled her to travel to New York, London and Paris, where she reinvented herself as a journalist. In 1937, Nancy met wealthy French industrialist Henri Edmond Fiocca, whom she married on 30 November 1939. The couple lived in Marseille and were there when the Germans invaded. Never a passive person, Nancy responded by becoming an ambulance driver. Then, after the fall of France in 1940, she joined an escape network known as the Pat O’Leary Line. The Gestapo pursued members of the Line and because of Nancy’s ability to elude capture they named her the ‘White Mouse’. In November 1942, the Nazis occupied Vichy France, increasing the danger for Nancy and members of the escape line. When a traitor betrayed the network, she had no option but to flee France. Her husband, Henri Fiocca, decided to stay in Marseille. Although Nancy loved Henri, he was known for his affairs and the couple parted on the tacit understanding that neither party would remain faithful. Their relationship was an unconventional one and, personally, I believe that’s why fictional accounts

of Nancy’s life have failed to capture the public’s imagination. Indeed, she was unimpressed with a well-made biopic released in her lifetime because she felt it focused on her relationship with Henri and not on her amazing wartime exploits. The Gestapo captured Henri and murdered him. Although she suspected, Nancy didn’t learn of Henri’s fate until after the Allies had liberated France. The news devastated her and although she later remarried she lived with that sadness for the rest of her long life. After escaping to Britain, Nancy joined the Special Operations Executive. Vera Atkins, a mother hen to the female members of the SOE, described Nancy as, “A real Australian bombshell. Tremendous vitality, flashing eyes. Everything she did, she did well.” Her intelligence record noted her “cheerful spirit and strength of character.” While M.R.D. Foot, the official historian of the SOE, said, “Her irrepressible, infectious, high spirits were a joy to everyone who worked with her.” During the night of 29–30 April 1944, Nancy parachuted into Auvergne, France as a member of a three-person team. The team liaised with the Resistance, which often tried Nancy’s patience because of internal bickering and local politics. Nancy’s duties included surveying, collecting arms and money from parachute drops, training the local - 62 -