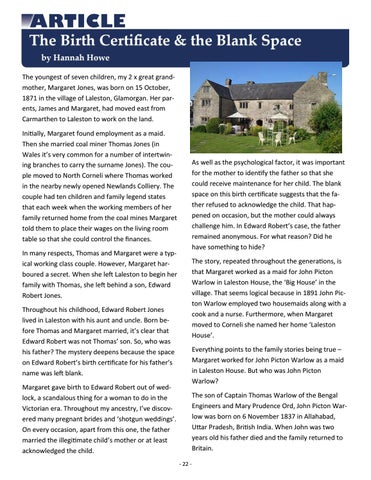 The Birth Certificate & the Blank Space by Hannah Howe The youngest of seven children, my 2 x great grandmother, Margaret Jones, was born on 15 October, 1871 in the village of Laleston, Glamorgan. Her parents, James and Margaret, had moved east from Carmarthen to Laleston to work on the land. Initially, Margaret found employment as a maid. Then she married coal miner Thomas Jones (in Wales it’s very common for a number of intertwining branches to carry the surname Jones). The couple moved to North Corneli where Thomas worked in the nearby newly opened Newlands Colliery. The couple had ten children and family legend states that each week when the working members of her family returned home from the coal mines Margaret told them to place their wages on the living room table so that she could control the finances.

As well as the psychological factor, it was important for the mother to identify the father so that she could receive maintenance for her child. The blank space on this birth certificate suggests that the father refused to acknowledge the child. That happened on occasion, but the mother could always challenge him. In Edward Robert’s case, the father remained anonymous. For what reason? Did he have something to hide?

In many respects, Thomas and Margaret were a typical working class couple. However, Margaret harboured a secret. When she left Laleston to begin her family with Thomas, she left behind a son, Edward Robert Jones.

Throughout his childhood, Edward Robert Jones lived in Laleston with his aunt and uncle. Born before Thomas and Margaret married, it’s clear that Edward Robert was not Thomas’ son. So, who was his father? The mystery deepens because the space on Edward Robert’s birth certificate for his father’s name was left blank.

Margaret gave birth to Edward Robert out of wedlock, a scandalous thing for a woman to do in the Victorian era. Throughout my ancestry, I’ve discovered many pregnant brides and ‘shotgun weddings’. On every occasion, apart from this one, the father married the illegitimate child’s mother or at least acknowledged the child.

The son of Captain Thomas Warlow of the Bengal Engineers and Mary Prudence Ord, John Picton Warlow was born on 6 November 1837 in Allahabad, Uttar Pradesh, British India. When John was two years old his father died and the family returned to Britain. - 22 -