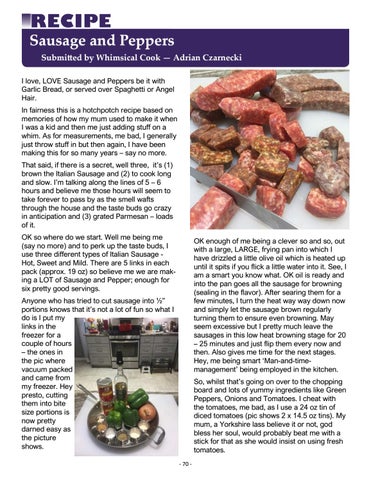 Sausage and Peppers Submitted by Whimsical Cook — Adrian Czarnecki I love, LOVE Sausage and Peppers be it with Garlic Bread, or served over Spaghetti or Angel Hair. In fairness this is a hotchpotch recipe based on memories of how my mum used to make it when I was a kid and then me just adding stuff on a whim. As for measurements, me bad, I generally just throw stuff in but then again, I have been making this for so many years – say no more. That said, if there is a secret, well three, it’s (1) brown the Italian Sausage and (2) to cook long and slow. I’m talking along the lines of 5 – 6 hours and believe me those hours will seem to take forever to pass by as the smell wafts through the house and the taste buds go crazy in anticipation and (3) grated Parmesan – loads of it.

OK so where do we start. Well me being me (say no more) and to perk up the taste buds, I use three different types of Italian Sausage Hot, Sweet and Mild. There are 5 links in each pack (approx. 19 oz) so believe me we are making a LOT of Sausage and Pepper; enough for six pretty good servings.

OK enough of me being a clever so and so, out with a large, LARGE, frying pan into which I have drizzled a little olive oil which is heated up until it spits if you flick a little water into it. See, I am a smart you know what. OK oil is ready and into the pan goes all the sausage for browning (sealing in the flavor). After searing them for a few minutes, I turn the heat way way down now and simply let the sausage brown regularly turning them to ensure even browning. May seem excessive but I pretty much leave the sausages in this low heat browning stage for 20 – 25 minutes and just flip them every now and then. Also gives me time for the next stages. Hey, me being smart ‘Man-and-timemanagement’ being employed in the kitchen.

Anyone who has tried to cut sausage into ½” portions knows that it’s not a lot of fun so what I do is I put my links in the freezer for a couple of hours – the ones in the pic where vacuum packed and came from my freezer. Hey presto, cutting them into bite size portions is now pretty darned easy as the picture shows.

So, whilst that’s going on over to the chopping board and lots of yummy ingredients like Green Peppers, Onions and Tomatoes. I cheat with the tomatoes, me bad, as I use a 24 oz tin of diced tomatoes (pic shows 2 x 14.5 oz tins). My mum, a Yorkshire lass believe it or not, god bless her soul, would probably beat me with a stick for that as she would insist on using fresh tomatoes. - 70 -