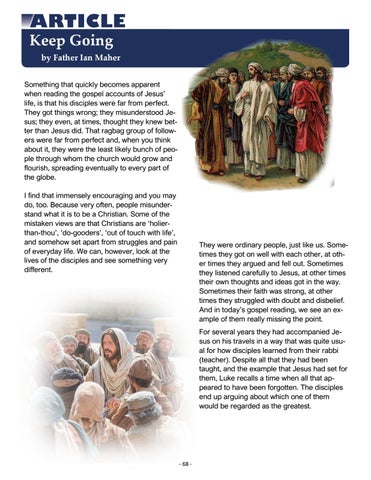 Keep Going by Father Ian Maher Something that quickly becomes apparent when reading the gospel accounts of Jesus’ life, is that his disciples were far from perfect. They got things wrong; they misunderstood Jesus; they even, at times, thought they knew better than Jesus did. That ragbag group of followers were far from perfect and, when you think about it, they were the least likely bunch of people through whom the church would grow and flourish, spreading eventually to every part of the globe. I find that immensely encouraging and you may do, too. Because very often, people misunderstand what it is to be a Christian. Some of the mistaken views are that Christians are ‘holierthan-thou’, ‘do-gooders’, ‘out of touch with life’, and somehow set apart from struggles and pain of everyday life. We can, however, look at the lives of the disciples and see something very different.

They were ordinary people, just like us. Sometimes they got on well with each other, at other times they argued and fell out. Sometimes they listened carefully to Jesus, at other times their own thoughts and ideas got in the way. Sometimes their faith was strong, at other times they struggled with doubt and disbelief. And in today’s gospel reading, we see an example of them really missing the point. For several years they had accompanied Jesus on his travels in a way that was quite usual for how disciples learned from their rabbi (teacher). Despite all that they had been taught, and the example that Jesus had set for them, Luke recalls a time when all that appeared to have been forgotten. The disciples end up arguing about which one of them would be regarded as the greatest.