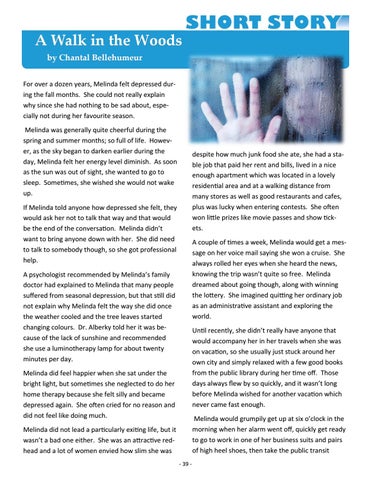 A Walk in the Woods by Chantal Bellehumeur For over a dozen years, Melinda felt depressed during the fall months. She could not really explain why since she had nothing to be sad about, especially not during her favourite season. Melinda was generally quite cheerful during the spring and summer months; so full of life. However, as the sky began to darken earlier during the day, Melinda felt her energy level diminish. As soon as the sun was out of sight, she wanted to go to sleep. Sometimes, she wished she would not wake up.

despite how much junk food she ate, she had a stable job that paid her rent and bills, lived in a nice enough apartment which was located in a lovely residential area and at a walking distance from many stores as well as good restaurants and cafes, plus was lucky when entering contests. She often won little prizes like movie passes and show tickets.

If Melinda told anyone how depressed she felt, they would ask her not to talk that way and that would be the end of the conversation. Melinda didn’t want to bring anyone down with her. She did need to talk to somebody though, so she got professional help.

A couple of times a week, Melinda would get a message on her voice mail saying she won a cruise. She always rolled her eyes when she heard the news, knowing the trip wasn’t quite so free. Melinda dreamed about going though, along with winning the lottery. She imagined quitting her ordinary job as an administrative assistant and exploring the world.

A psychologist recommended by Melinda’s family doctor had explained to Melinda that many people suffered from seasonal depression, but that still did not explain why Melinda felt the way she did once the weather cooled and the tree leaves started changing colours. Dr. Alberky told her it was because of the lack of sunshine and recommended she use a luminotherapy lamp for about twenty minutes per day.

Until recently, she didn’t really have anyone that would accompany her in her travels when she was on vacation, so she usually just stuck around her own city and simply relaxed with a few good books from the public library during her time off. Those days always flew by so quickly, and it wasn’t long before Melinda wished for another vacation which never came fast enough.

Melinda did feel happier when she sat under the bright light, but sometimes she neglected to do her home therapy because she felt silly and became depressed again. She often cried for no reason and did not feel like doing much.

Melinda would grumpily get up at six o’clock in the morning when her alarm went off, quickly get ready to go to work in one of her business suits and pairs of high heel shoes, then take the public transit

Melinda did not lead a particularly exiting life, but it wasn’t a bad one either. She was an attractive redhead and a lot of women envied how slim she was - 39 -