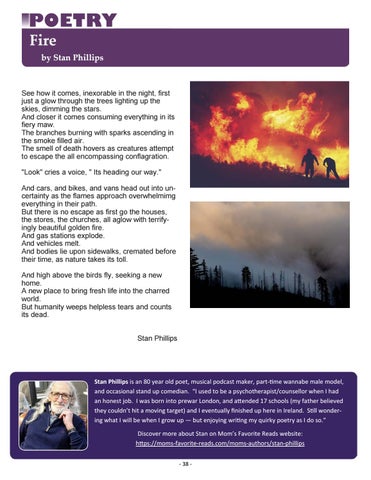 See how it comes, inexorable in the night, first just a glow through the trees lighting up the skies, dimming the stars. And closer it comes consuming everything in its fiery maw. The branches burning with sparks ascending in the smoke filled air. The smell of death hovers as creatures attempt to escape the all encompassing conflagration. "Look" cries a voice, " Its heading our way." And cars, and bikes, and vans head out into uncertainty as the flames approach overwhelmimg everything in their path. But there is no escape as first go the houses, the stores, the churches, all aglow with terrifyingly beautiful golden fire. And gas stations explode. And vehicles melt. And bodies lie upon sidewalks, cremated before their time, as nature takes its toll. And high above the birds fly, seeking a new home. A new place to bring fresh life into the charred world. But humanity weeps helpless tears and counts its dead. Stan Phillips

Stan Phillips is an 80 year old poet, musical podcast maker, part-time wannabe male model, and occasional stand up comedian. “I used to be a psychotherapist/counsellor when I had an honest job. I was born into prewar London, and attended 17 schools (my father believed they couldn’t hit a moving target) and I eventually finished up here in Ireland. Still wondering what I will be when I grow up — but enjoying writing my quirky poetry as I do so.” Discover more about Stan on Mom’s Favorite Reads website: https://moms-favorite-reads.com/moms-authors/stan-phillips - 38 -