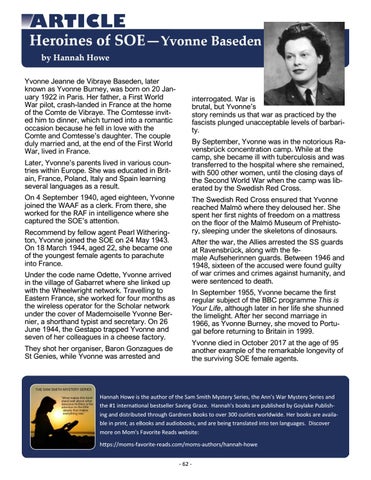 Heroines of SOE—Yvonne Baseden by Hannah Howe Yvonne Jeanne de Vibraye Baseden, later known as Yvonne Burney, was born on 20 January 1922 in Paris. Her father, a First World War pilot, crash-landed in France at the home of the Comte de Vibraye. The Comtesse invited him to dinner, which turned into a romantic occasion because he fell in love with the Comte and Comtesse’s daughter. The couple duly married and, at the end of the First World War, lived in France.

interrogated. War is brutal, but Yvonne’s story reminds us that war as practiced by the fascists plunged unacceptable levels of barbarity. By September, Yvonne was in the notorious Ravensbrück concentration camp. While at the camp, she became ill with tuberculosis and was transferred to the hospital where she remained, with 500 other women, until the closing days of the Second World War when the camp was liberated by the Swedish Red Cross.

Later, Yvonne’s parents lived in various countries within Europe. She was educated in Britain, France, Poland, Italy and Spain learning several languages as a result. On 4 September 1940, aged eighteen, Yvonne joined the WAAF as a clerk. From there, she worked for the RAF in intelligence where she captured the SOE’s attention.

The Swedish Red Cross ensured that Yvonne reached Malmö where they deloused her. She spent her first nights of freedom on a mattress on the floor of the Malmö Museum of Prehistory, sleeping under the skeletons of dinosaurs.

Recommend by fellow agent Pearl Witherington, Yvonne joined the SOE on 24 May 1943. On 18 March 1944, aged 22, she became one of the youngest female agents to parachute into France.

After the war, the Allies arrested the SS guards at Ravensbrück, along with the female Aufseherinnen guards. Between 1946 and 1948, sixteen of the accused were found guilty of war crimes and crimes against humanity, and were sentenced to death.

Under the code name Odette, Yvonne arrived in the village of Gabarret where she linked up with the Wheelwright network. Travelling to Eastern France, she worked for four months as the wireless operator for the Scholar network under the cover of Mademoiselle Yvonne Bernier, a shorthand typist and secretary. On 26 June 1944, the Gestapo trapped Yvonne and seven of her colleagues in a cheese factory.

In September 1955, Yvonne became the first regular subject of the BBC programme This is Your Life, although later in her life she shunned the limelight. After her second marriage in 1966, as Yvonne Burney, she moved to Portugal before returning to Britain in 1999. Yvonne died in October 2017 at the age of 95 another example of the remarkable longevity of the surviving SOE female agents.

They shot her organiser, Baron Gonzagues de St Genies, while Yvonne was arrested and

Hannah Howe is the author of the Sam Smith Mystery Series, the Ann's War Mystery Series and the #1 international bestseller Saving Grace. Hannah's books are published by Goylake Publishing and distributed through Gardners Books to over 300 outlets worldwide. Her books are available in print, as eBooks and audiobooks, and are being translated into ten languages. Discover more on Mom's Favorite Reads website: https://moms-favorite-reads.com/moms-authors/hannah-howe - 62 -