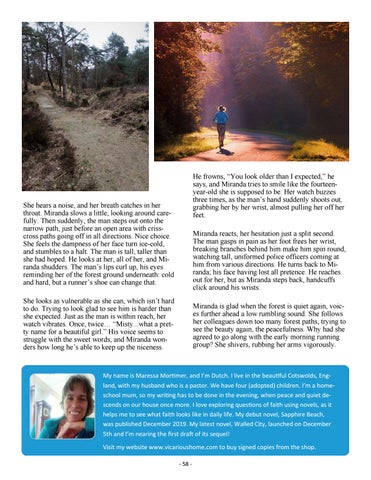 He frowns, “You look older than I expected,” he says, and Miranda tries to smile like the fourteenyear-old she is supposed to be. Her watch buzzes three times, as the man’s hand suddenly shoots out, grabbing her by her wrist, almost pulling her off her feet.

She hears a noise, and her breath catches in her throat. Miranda slows a little, looking around carefully. Then suddenly, the man steps out onto the narrow path, just before an open area with crisscross paths going off in all directions. Nice choice. She feels the dampness of her face turn ice-cold, and stumbles to a halt. The man is tall, taller than she had hoped. He looks at her, all of her, and Miranda shudders. The man’s lips curl up, his eyes reminding her of the forest ground underneath: cold and hard, but a runner’s shoe can change that.

Miranda reacts, her hesitation just a split second. The man gasps in pain as her foot frees her wrist, breaking branches behind him make him spin round, watching tall, uniformed police officers coming at him from various directions. He turns back to Miranda; his face having lost all pretence. He reaches out for her, but as Miranda steps back, handcuffs click around his wrists.

She looks as vulnerable as she can, which isn’t hard to do. Trying to look glad to see him is harder than she expected. Just as the man is within reach, her watch vibrates. Once, twice… “Misty...what a pretty name for a beautiful girl.” His voice seems to struggle with the sweet words, and Miranda wonders how long he’s able to keep up the niceness.

Miranda is glad when the forest is quiet again, voices further ahead a low rumbling sound. She follows her colleagues down too many forest paths, trying to see the beauty again, the peacefulness. Why had she agreed to go along with the early morning running group? She shivers, rubbing her arms vigorously.

My name is Maressa Mortimer, and I’m Dutch. I live in the beautiful Cotswolds, England, with my husband who is a pastor. We have four (adopted) children. I’m a homeschool mum, so my writing has to be done in the evening, when peace and quiet descends on our house once more. I love exploring questions of faith using novels, as it helps me to see what faith looks like in daily life. My debut novel, Sapphire Beach, was published December 2019. My latest novel, Walled City, launched on December 5th and I’m nearing the first draft of its sequel! Visit my website www.vicarioushome.com to buy signed copies from the shop. - 58 -