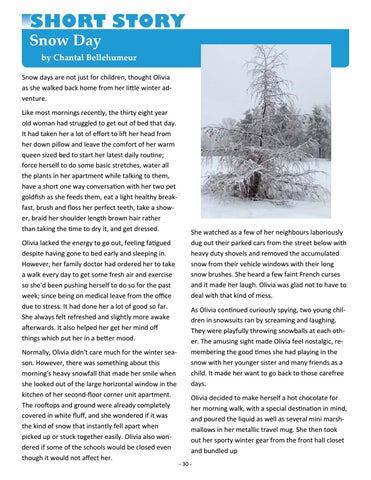 Snow Day by Chantal Bellehumeur Snow days are not just for children, thought Olivia as she walked back home from her little winter adventure. Like most mornings recently, the thirty eight year old woman had struggled to get out of bed that day. It had taken her a lot of effort to lift her head from her down pillow and leave the comfort of her warm queen sized bed to start her latest daily routine; force herself to do some basic stretches, water all the plants in her apartment while talking to them, have a short one way conversation with her two pet goldfish as she feeds them, eat a light healthy breakfast, brush and floss her perfect teeth, take a shower, braid her shoulder length brown hair rather than taking the time to dry it, and get dressed.

Olivia lacked the energy to go out, feeling fatigued despite having gone to bed early and sleeping in. However, her family doctor had ordered her to take a walk every day to get some fresh air and exercise so she'd been pushing herself to do so for the past week; since being on medical leave from the office due to stress. It had done her a lot of good so far. She always felt refreshed and slightly more awake afterwards. It also helped her get her mind off things which put her in a better mood. Normally, Olivia didn't care much for the winter season. However, there was something about this morning's heavy snowfall that made her smile when she looked out of the large horizontal window in the kitchen of her second-floor corner unit apartment. The rooftops and ground were already completely covered in white fluff, and she wondered if it was the kind of snow that instantly fell apart when picked up or stuck together easily. Olivia also wondered if some of the schools would be closed even though it would not affect her.

She watched as a few of her neighbours laboriously dug out their parked cars from the street below with heavy duty shovels and removed the accumulated snow from their vehicle windows with their long snow brushes. She heard a few faint French curses and it made her laugh. Olivia was glad not to have to deal with that kind of mess. As Olivia continued curiously spying, two young children in snowsuits ran by screaming and laughing. They were playfully throwing snowballs at each other. The amusing sight made Olivia feel nostalgic, remembering the good times she had playing in the snow with her younger sister and many friends as a child. It made her want to go back to those carefree days. Olivia decided to make herself a hot chocolate for her morning walk, with a special destination in mind, and poured the liquid as well as several mini marshmallows in her metallic travel mug. She then took out her sporty winter gear from the front hall closet and bundled up. - 30 -