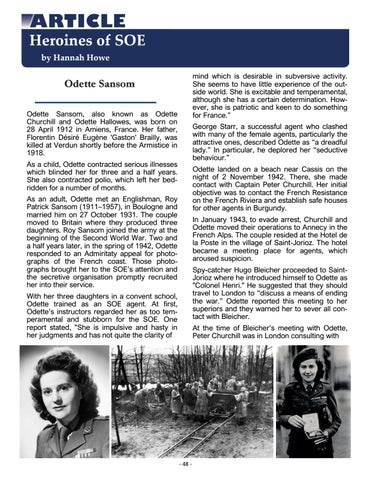 Heroines of SOE by Hannah Howe mind which is desirable in subversive activity. She seems to have little experience of the outside world. She is excitable and temperamental, although she has a certain determination. However, she is patriotic and keen to do something for France.”

Odette Sansom Odette Sansom, also known as Odette Churchill and Odette Hallowes, was born on 28 April 1912 in Amiens, France. Her father, Florentin Désiré Eugène 'Gaston' Brailly, was killed at Verdun shortly before the Armistice in 1918.

George Starr, a successful agent who clashed with many of the female agents, particularly the attractive ones, described Odette as “a dreadful lady.” In particular, he deplored her “seductive behaviour.”

As a child, Odette contracted serious illnesses which blinded her for three and a half years. She also contracted polio, which left her bedridden for a number of months.

Odette landed on a beach near Cassis on the night of 2 November 1942. There, she made contact with Captain Peter Churchill. Her initial objective was to contact the French Resistance on the French Riviera and establish safe houses for other agents in Burgundy.

As an adult, Odette met an Englishman, Roy Patrick Sansom (1911–1957), in Boulogne and married him on 27 October 1931. The couple moved to Britain where they produced three daughters. Roy Sansom joined the army at the beginning of the Second World War. Two and a half years later, in the spring of 1942, Odette responded to an Admiritaty appeal for photographs of the French coast. Those photographs brought her to the SOE’s attention and the secretive organisation promptly recruited her into their service.

In January 1943, to evade arrest, Churchill and Odette moved their operations to Annecy in the French Alps. The couple resided at the Hotel de la Poste in the village of Saint-Jorioz. The hotel became a meeting place for agents, which aroused suspicion. Spy-catcher Hugo Bleicher proceeded to SaintJorioz where he introduced himself to Odette as "Colonel Henri." He suggested that they should travel to London to “discuss a means of ending the war.” Odette reported this meeting to her superiors and they warned her to sever all contact with Bleicher.

With her three daughters in a convent school, Odette trained as an SOE agent. At first, Odette’s instructors regarded her as too temperamental and stubborn for the SOE. One report stated, "She is impulsive and hasty in her judgments and has not quite the clarity of

At the time of Bleicher’s meeting with Odette, Peter Churchill was in London consulting with