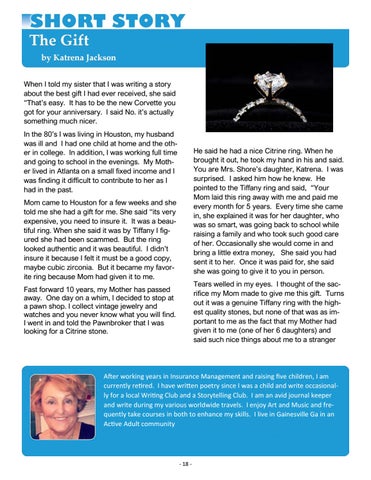 The Gift by Katrena Jackson When I told my sister that I was writing a story about the best gift I had ever received, she said “That’s easy. It has to be the new Corvette you got for your anniversary. I said No. it’s actually something much nicer. In the 80’s I was living in Houston, my husband was ill and I had one child at home and the other in college. In addition, I was working full time and going to school in the evenings. My Mother lived in Atlanta on a small fixed income and I was finding it difficult to contribute to her as I had in the past.

He said he had a nice Citrine ring. When he brought it out, he took my hand in his and said. You are Mrs. Shore’s daughter, Katrena. I was surprised. I asked him how he knew. He pointed to the Tiffany ring and said, “Your Mom laid this ring away with me and paid me every month for 5 years. Every time she came in, she explained it was for her daughter, who was so smart, was going back to school while raising a family and who took such good care of her. Occasionally she would come in and bring a little extra money, She said you had sent it to her. Once it was paid for, she said she was going to give it to you in person.

Mom came to Houston for a few weeks and she told me she had a gift for me. She said “its very expensive, you need to insure it. It was a beautiful ring. When she said it was by Tiffany I figured she had been scammed. But the ring looked authentic and it was beautiful. I didn’t insure it because I felt it must be a good copy, maybe cubic zirconia. But it became my favorite ring because Mom had given it to me.

Tears welled in my eyes. I thought of the sacrifice my Mom made to give me this gift. Turns out it was a genuine Tiffany ring with the highest quality stones, but none of that was as important to me as the fact that my Mother had given it to me (one of her 6 daughters) and said such nice things about me to a stranger

Fast forward 10 years, my Mother has passed away. One day on a whim, I decided to stop at a pawn shop. I collect vintage jewelry and watches and you never know what you will find. I went in and told the Pawnbroker that I was looking for a Citrine stone.

After working years in Insurance Management and raising five children, I am currently retired. I have written poetry since I was a child and write occasionally for a local Writing Club and a Storytelling Club. I am an avid journal keeper and write during my various worldwide travels. I enjoy Art and Music and frequently take courses in both to enhance my skills. I live in Gainesville Ga in an Active Adult community