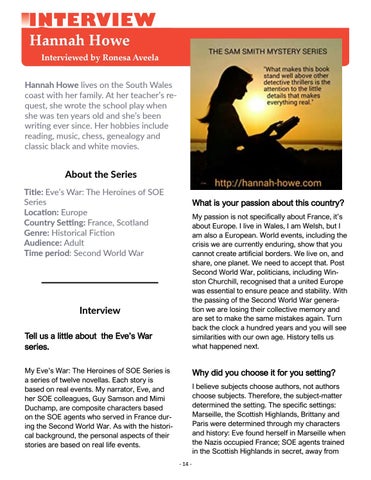 Hannah Howe Interviewed by Ronesa Aveela Hannah Howe lives on the South Wales coast with her family. At her teacher’s request, she wrote the school play when she was ten years old and she’s been writing ever since. Her hobbies include reading, music, chess, genealogy and classic black and white movies.

What is your passion about this country? My passion is not specifically about France, it’s about Europe. I live in Wales, I am Welsh, but I am also a European. World events, including the crisis we are currently enduring, show that you cannot create artificial borders. We live on, and share, one planet. We need to accept that. Post Second World War, politicians, including Winston Churchill, recognised that a united Europe was essential to ensure peace and stability. With the passing of the Second World War generation we are losing their collective memory and are set to make the same mistakes again. Turn back the clock a hundred years and you will see similarities with our own age. History tells us what happened next.

Interview Tell us a little about the Eve’s War series. My Eve’s War: The Heroines of SOE Series is a series of twelve novellas. Each story is based on real events. My narrator, Eve, and her SOE colleagues, Guy Samson and Mimi Duchamp, are composite characters based on the SOE agents who served in France during the Second World War. As with the historical background, the personal aspects of their stories are based on real life events.

Why did you choose it for you setting? I believe subjects choose authors, not authors choose subjects. Therefore, the subject-matter determined the setting. The specific settings: Marseille, the Scottish Highlands, Brittany and Paris were determined through my characters and history: Eve found herself in Marseille when the Nazis occupied France; SOE agents trained in the Scottish Highlands in secret, away from - 14 -