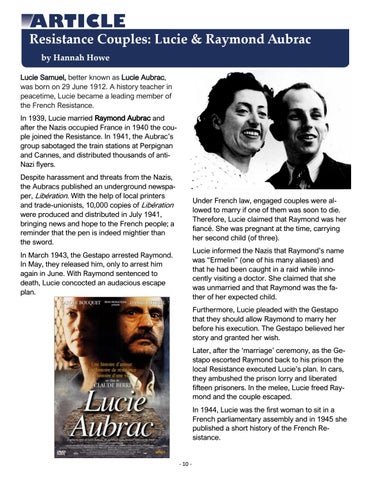 Resistance Couples: Lucie & Raymond Aubrac by Hannah Howe Lucie Samuel, better known as Lucie Aubrac, was born on 29 June 1912. A history teacher in peacetime, Lucie became a leading member of the French Resistance. In 1939, Lucie married Raymond Aubrac and after the Nazis occupied France in 1940 the couple joined the Resistance. In 1941, the Aubrac’s group sabotaged the train stations at Perpignan and Cannes, and distributed thousands of antiNazi flyers. Despite harassment and threats from the Nazis, the Aubracs published an underground newspaper, Libération. With the help of local printers and trade-unionists, 10,000 copies of Libération were produced and distributed in July 1941, bringing news and hope to the French people; a reminder that the pen is indeed mightier than the sword.

Under French law, engaged couples were allowed to marry if one of them was soon to die. Therefore, Lucie claimed that Raymond was her fiancé. She was pregnant at the time, carrying her second child (of three). Lucie informed the Nazis that Raymond’s name was “Ermelin” (one of his many aliases) and that he had been caught in a raid while innocently visiting a doctor. She claimed that she was unmarried and that Raymond was the father of her expected child.

In March 1943, the Gestapo arrested Raymond. In May, they released him, only to arrest him again in June. With Raymond sentenced to death, Lucie concocted an audacious escape plan.

Furthermore, Lucie pleaded with the Gestapo that they should allow Raymond to marry her before his execution. The Gestapo believed her story and granted her wish. Later, after the ‘marriage’ ceremony, as the Gestapo escorted Raymond back to his prison the local Resistance executed Lucie’s plan. In cars, they ambushed the prison lorry and liberated fifteen prisoners. In the melee, Lucie freed Raymond and the couple escaped. In 1944, Lucie was the first woman to sit in a French parliamentary assembly and in 1945 she published a short history of the French Resistance. - 10 -