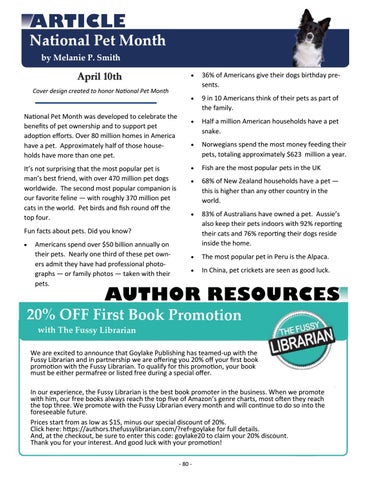 National Pet Month was developed to celebrate the benefits of pet ownership and to support pet adoption efforts. Over 80 million homes in America have a pet. Approximately half of those households have more than one pet. It’s not surprising that the most popular pet is man’s best friend, with over 470 million pet dogs worldwide. The second most popular companion is our favorite feline — with roughly 370 million pet cats in the world. Pet birds and fish round off the top four.

36% of Americans give their dogs birthday presents.

9 in 10 Americans think of their pets as part of the family.

Half a million American households have a pet snake.

Norwegians spend the most money feeding their pets, totaling approximately $623 million a year.

Fish are the most popular pets in the UK

68% of New Zealand households have a pet — this is higher than any other country in the world.

The most popular pet in Peru is the Alpaca.

In China, pet crickets are seen as good luck.

Fun facts about pets. Did you know? •

Americans spend over $50 billion annually on their pets. Nearly one third of these pet owners admit they have had professional photographs — or family photos — taken with their pets.

We are excited to announce that Goylake Publishing has teamed-up with the Fussy Librarian and in partnership we are offering you 20% off your first book promotion with the Fussy Librarian. To qualify for this promotion, your book must be either permafree or listed free during a special offer. In our experience, the Fussy Librarian is the best book promoter in the business. When we promote with him, our free books always reach the top five of Amazon’s genre charts, most often they reach the top three. We promote with the Fussy Librarian every month and will continue to do so into the foreseeable future. Prices start from as low as $15, minus our special discount of 20%. Click here: https://authors.thefussylibrarian.com/?ref=goylake for full details. And, at the checkout, be sure to enter this code: goylake20 to claim your 20% discount. Thank you for your interest. And good luck with your promotion! - 80 -